The 2011 Sonata tops The Car Connection's numeric ratings among all vehicles with a base price of less than $50,000, including destination. That it does so at a base price of $19,995 is a testament to the thorough transformation it's undergone--in moving to a U.S. assembly site, in adopting a vivid and memorable new styling theme, and in delivering top-notch safety and a full list of standard features, right out of the box.

The Sonata's challengers provided stiff competition. The Acura TSX remains our favorite Acura, with great road manners and a new wagon body style promising even more utility. The Infiniti M37 has some of the design magic promised by that brand's Essence show car, with grippy and engaging handling. The BMW 5-Series? It's hard to find fault with the 5er's road manners or with its streamlined cabin. 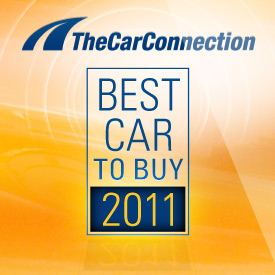 In the end, the Sonata's toughest competitor proved to be its own corporate cousin, the 2011 Kia Optima, which rates an identical 8.7 out of 10. Many of TCC's editors prefer the Optima's crisp lines, but while all three Sonatas are on sale in time, the Optima Hybrid will be introduced after our qualification dates. The distinction is slight, but the Sonata earns the tiebreak because all its versions are on sale--and because of its huge impact on the mid-size sedan market, where it now ranks third in overall sales.

For more on our winner, read TheCarConnection's full review of the 2011 Hyundai Sonata. To stay up to date with all our winners--and with the Los Angeles Auto Show--follow High Gear Media on Facebook, or on Twitter @highgearmedia @carconnection @therealma @greencarreports.