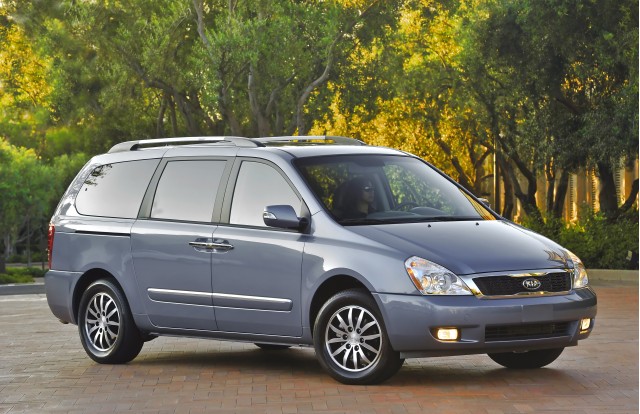 Minivans are big news for the 2011 model year, with every family wagon offered for sale in America undergoing a transformation.

While the Sienna, Odyssey and Chrysler's minivans get more comprehensive renovations, the 2011 Kia Sedona hasn't been left out of the sprucing-up party. The Sedona brings a new powertrain and new tech features with it, when it arrives in showrooms soon.

The new engine is a 3.5-liter V-6 with 271 horsepower, teamed to a new six-speed automatic transmission. If it sounds familiar, it does to FamilyCarGuide too--perhaps it's somewhat related to the same-sounding combo in sister company Hyundai's new Azera sedan? The front-drive Sedona gets improved fuel economy with its powertrain, up to 18/25 mpg according to the EPA. There's also a sport mode for the transmission.

In the past, the Sedona has been a Top Safety Pick, as noted by the Insurance Institute for Highway Safety, and a strong performer in the National Highway Traffic Safety Administration (NHTSA) crash tests as well. While the IIHS' Top Safety Pick standards have changed to include roof-crush resistance, the other safety scores should carry over to this new version intact, since the only exterior changes on the Sedona are a mildly revised grille, which brings it into the family of Kia cars a bit better.

The Sedona's interior lacks the second-row fold-away floor of the Chrysler minivans and the 2010 Nissan Quest (the 2011 Quest is waiting in the wings, with unspecified interior features), but it does offer a fold-away third-row seat.

New features for the minivan include standard Bluetooth, in both the base LX and upscale EX versions, reverse parking sensors, second-row bucket seats, along with satellite radio and steering-wheel controls for the audio system. The EX edition adds power-adjusted front seats, power rear-quarter windows, and a rearview camera that projects its information into the rearview mirror.

Pricing for the 2011 Sedona starts at $24,595, not including destination charges.