Trains Are Safer Than Cars--Unless a Truck Falls On You 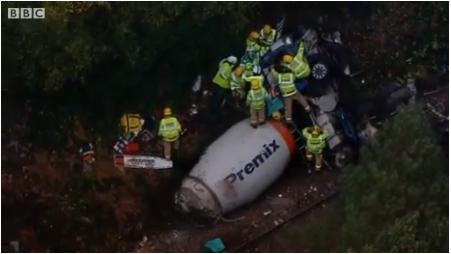 It's widely established that riding on a train is safer, statistically, than driving a car.

In fact, in the U.S., it's a remarkable 24 times safer, measured in fatalities per 100 million miles traveled.

Unless, of course, a truck happens to fall onto the train car you're riding in.

Which is exactly what happened today outside Oxshott, Surrey, England. A concrete mixer veered into a brick bridge abutment, plunged through it, and fell onto a 3:05 pm commuter train from Guildford to London that happened to be passing under the bridge at that moment.

The driver and at least one passenger were seriously injured, along with five other passengers who were also taken to hospital.

It's worth noting that U.S. train cars are required to meet far tougher crash-test standards than are European ones, just as cars sold in North America have to meet tougher crash tests imposed by the U.S. National Highway Traffic Safety Administration (NHTSA) as well as ratings by the Insurance Institute for Highway Safety (IIHS).

The BBC story and video below provide full details.