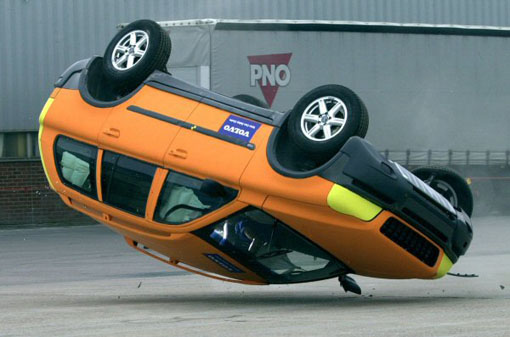 GM: Rollover airbags standard on all models by 2012

SUVs are safer, right? You probably have a coworker, or someone in the family, who's always insisted that.

Until the early 1990s, SUVs were undeniably more dangerous than cars, looking purely at fatality numbers and considering their poor emergency handling on the highway, but then the two numbers flipped and SUVs have been making more significant gains in recent years.

According to 2009-calendar-year statistics, as recently presented by the Insurance Institute for Highway Safety (IIHS), no matter which way you look at the numbers, they're now pointing to SUVs as a very safe choice—perhaps even a safer one.

For all occupant fatalities in 2009, 52 percent involved a primary frontal impact, 27 percent a side impact, and just four percent a rear impact. Sixteen percent of all occupant deaths were attributed primarily to 'other' (representing rollovers, mostly).

But rollover remained the greatest concern for those considering an SUV. Still, nearly twice as many fatal accidents in SUVs (27 percent, versus 11 percent in cars) involved rollover in 2009. For single-vehicle crashes—such as running off the road avoiding an impact with a vehicle, or falling asleep—40 percent of SUV crashes, versus 21 percent in cars, involved rollover. Overall, 64 percent of total vehicle deaths for pickups and SUVs occur in those single-vehicle crashes, while for cars it's just 46 percent.

Here's where it gets interesting: Adjusted for number of registered vehicles, and only considering those vehicles 1-3 years old, SUVs are now far safer than passenger cars overall. For 2009, there were 39 occupant deaths per million registered SUVs—versus 82 for cars, and 94 for pickups.

Larger cars (and pickups) tend to have the lowest fatality rates, the IIHS points out (see the chart we clipped below), but that's not true for SUVs—perhaps because of impaired accident-avoidance ability for the largest trucks. Very large trucks weren't as safe as the largest, heaviest cars, but midsize and large SUVs proved safer than mid-size or large cars.

"When you get to a particular (especially heavy weight class), weight doesn't help you but instead inflicts greater damage to other vehicles—and occupants. "Size and weight make a difference up to a point," summed IIHS senior vice president Anne Fleming.

But it appears that automakers are finally solving the rollover issue. Looking only at rollovers, driver deaths in SUVs actually dipped below those in cars for the first time in 2008, and they continued that trend for 2009—now at just 7 rollover deaths per million registered vehicles 1-3 years old, versus 13 deaths in cars. 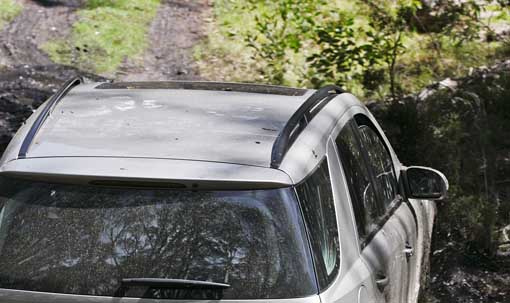 The numbers might be good for SUVs, the IIHS still recommends large passenger cars over sport-utility vehicles as the safest vehicle type.

"We acknowledge the improvement, but we're not ready to say they're better," said Fleming. While most of the dramatic improvement in rollover performance is due to improved roof protection, cars have some catching-up to do in the statistics as many models didn't get stability control until the past year or two, Fleming explained. The IIHS now tests vehicles on a regular basis for roof crush, but we're still also several years away from a stronger federal standard that will apply to all SUVs.

"Purely in the interest of self-preservation, an SUV might very well be as good as a large car by now," said Fleming, but the potential damage you could do to other occupants should be considered, too.

If you're dizzied by all these figures and percentages, you're not alone. What you need to take away from this is that SUVs have gotten a lot safer in recent years. And that it looks like mid-size or large crossover vehicles—of the lowest, most carlike variety—might be the best compromise.

The elephant in the room, of course, is that what we call SUVs today are in general very different than the SUVs of a decade ago. You're probably safer in one of the larger crossover vehicles that's also low enough to be maneuverable in an emergency and have a lower chance of rollover. Looking at the IIHS's list of Top Safety Picks, that would include vehicles like the Cadillac SRX and Chevrolet Equinox, Lexus RX, Subaru Tribeca, Subaru Forester, and Toyota Venza, among many others.

Of course we're still open to arguments here. Cars handle better, so in the hands of a skilled driver, or one more at ease with the vehicle, the chances of an accident might be lower.

Are there still other factors that aren't showing up in the numbers? What type of vehicle do you think is safest, and why?