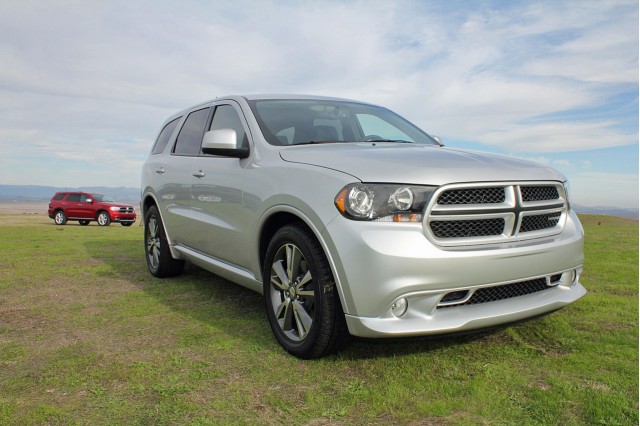 If the 2011 Jeep Grand Cherokee is a distant cousin to the Mercedes ML--and a proud one at that--does that make this 2011 Dodge Durango kin to the Benz GL?

And does that make its $30,000 base price even more of a screaming bargain?

Chrysler set the Grand Cherokee free earlier this year, in a first-drive press event all its own, but it pooled the Durango together with a refurbished Dodge lineup. We flew to northern California to drive the Durango and five other new or revised Dodges for the first time, and on a windy hilltop overlooking the Infineon Raceway, we slipped the keys to an R/T in our pockets and rolled through Napa to sample the V-8 and also the V-6 SUV.

At first glance, the Durango's new wagon body is less distinctive, and less muscular, than the old truck-based version. Chrysler's merged the Durango with the Grand Cherokee's unibody architecture and in the process, it's honed off the bulges and some of the character. That immense crosshair grille cants forward atop a short front overhang, but that's the last truly unique cue you can pick out as you move down the seven-seater's profile. From the rear, in particular, the Durango reads like second-generation Toyota Sequoia--blandly, benignly handsome.

The cockpit brings the real visual impact. Like the Grand Cherokee, the new Durango sends outdated, hard-edge plastics to the recycling bin. Snapped into place is a tightly fitted, attractive cabin with big red-needled gauges, simple climate-control knobs, and backpedaled touches of bright and soft metallic trim. Our R/T tester also had leather upholstery with woven red inserts and red stitching, and white trim rings on the dials, all well downplayed. 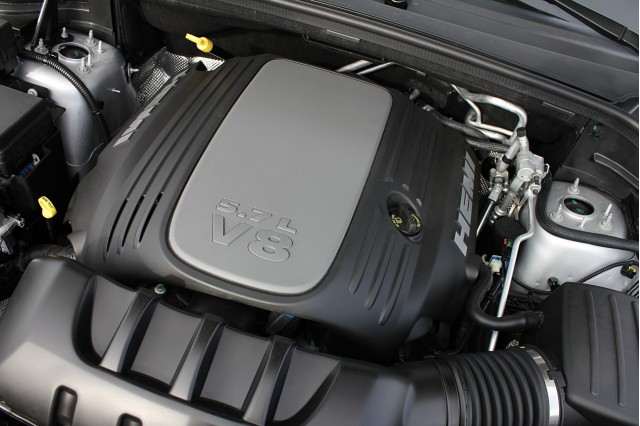 Chrysler's reformatting its corporate drivetrains by deleting its antique sixes and deleting a mid-range V-8 from the Durango checksheet. Down to only a 3.6-liter V-6 or the HEMI 5.7-liter V-8, the Durango gets focused on superior powertrain performance, and wins the battles for acceleration, responsiveness and towing capacity.

We spent some of our Durango first-drive time in the Pentastar V-6 and thought it mated better with the essentially carryover five-speed automatic, than it does with Chrysler's new six-speed gearboxes. The gears are spaced well enough, and the V-6's 290 horsepower and 260 pound-feet or torque spin out predictable mid-range acceleration in the 8-second range--though with a little less of the exhaust boom we found in the Grand Cherokee. The combination yields EPA numbers of 16/23 mpg for rear-drive versions, and 16/22 mpg with all-wheel drive--pretty acceptable numbers for a vehicle of the Durango's size.

Opt into the HEMI-equipped Durango and fuel economy slides to 14/20 mpg (or 13/20 mpg with all-wheel drive), since the same five-speed automatic is in charge of switching gears (an eight-speed is in the pipeline, Chrysler says). But the penalty comes with all those fantastic HEMI drivetrain noises, and the thrust of 360 horsepower and 390 pound-feet of torque. It's the anti-crossover, especially with the HEMI and R/T trim, and if the world still sanctioned big SUVs for small families, the Durango R/T would be elbowing out the Flex, the Acadia and other big crossovers capable of fuel economy in the mid-20s. With the six, it's good enough, but with the V-8 the Durango is great--and it's rugged enough to tow up to 7400 pounds.

With its new everything underneath--independent suspension, big brakes, meaty steering feel--the Durango's never felt better to drive. From the driver's perch, the not so eerie resemblances to the Mercedes-Benz GL-Class emerge. There's some head toss to deal with, the kind that comes from lateral stiffness induced to create more carlike driving feel, but the steering winds and unwinds with more precision than in a Caliber hatchback, and ride quality's tremendously good even with the optional 20-inch wheels and tires. There's none of the bounding you'd find in a Grand Caravan, which also seats seven--the Durango's heft mutes it out, even without the optional, advanced air suspension of the Grand Cherokee and the GL-Class. Chrysler plainly said in its Grand Cherokee press materials that the new Jeep was related to the current Benz M-Class. There's no such boasting in the Durango's kit, but there's a short aside on the Durango's superior rigidity compared to the Benz GL-Class.

We'll also point out that the seating arrangements, down to the flip-fold features of the third-row headrests, are strikingly similar to those in the Mercedes. And it's all for the good of the Durango: it's blessed with comfortable seating in all front five positions, and even the third row could be pressed into duty for small adults.

Safety should be another Durango strong point. Dual front, side and curtain airbags are standard; so are anti-lock brakes, traction and stability control. A blind-spot warning system, a rearview camera and parking sensors are available on the four different trim levels--and though it gives up a little of the visibility that the more glassy GL-Class offers to the rear quarters, the Durango has the high driving-seat position and squared-off corners to make parking and cruising easy enough.

The base Durango Express is priced just below $30,000 and includes air conditioning; power windows, locks and mirrors; an AM/FM/CD player; remote start; tilt/telescope steering wheel; and three-row seating. Satellite radio is also standard, but Bluetooth is an option and upgrades like power seats, seat heating, push-button start and a power telescoping steering wheel are not offered.

With the R/T comes a standard vinyl-and-suede seat (another detail shared with the GL-Class); 20-inch wheels; Bluetooth; a hard drive for music storage; and the HEMI V-8. A Durango Crew model adds on roof rails; a cargo cover; memory presets for seating and key fobs; rear parking sensors and the rearview camera. At the very top of the Durango pile is the Citadel model; for about $42,000 it bundles almost every option and feature including a sunroof; blind-spot monitors; adaptive cruise control; a Garmin navigation system; and a heated steering wheel. The HEMI V-8 is an option on Crew and Citadel models; so is Sirius Backseat TV and a more rugged towing package.

It's not so easy to see the family resemblance between the Grand Cherokee and the Durango--or to eyeball their essential closeness to the current crop of Mercedes-Benz sport-utes. All of them drive with the same engaging feel, and even minus the economy-leading diesels of the Benz utes, the Chrysler versions are strong enough to make the case for SUV superiority amidst the blur of seven-seat crossovers.