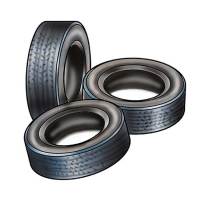 If it's nearly time to get a new set of tires, you might want to head out to the tire shop sooner rather than later. Due to a perfect storm of rubber supply issues, storms in Asia further hampering supply, and spiking demand in China and other developing countries, tires are rapidly becoming less affordable.

This past spring, tire prices were already on the way up, due to rising material prices and increased demand in developing markets like China. Over the spring and summer, most tiremakers hiked prices by up to eight percent.

Now, there's yet another round of very significant price increases. Yokohama announced another price hike of eight percent on all consumer tires, effective December 1, 2010; Pirelli North America will hike consumer prices on tires by up to 7 percent December 1; and Falken, Kumho, Hankook, and Cooper all raised prices by 6.5 to 8 percent November 1.

The latest reason? Heavy rains in the major rubber-producing regions of Southeast Asia are disrupting rubber tapping and driving prices up further. Altogether, over the past year, the price of natural rubber has risen by 65 percent, according to the Financial Times.

Time to stock up?

You might also want to make some other advance purchases, as prices for the other two common consumer products that still use natural rubber—rubber gloves and condoms—are headed up too. Three of the leading condom makers, SSL International, Church & Dwight, and Ansell, are considering price increases, and citing a condom shop, the FT says that prices on the contraceptives have already risen by between 10 and 20 percent over the past year.

Unfortunately, you can't stockpile tires; they degrade with time and typically have a maximum service life of six to eight years, even if they're just sitting on a shelf or if they're seeing almost no mileage. The same, it's likely, would hold true with condoms.

With continued rising demand largely because of skyrocketing vehicle sales in China and other emerging markets, the supply situation is expected to get worse before it gets better.

Last year the Obama administration enacted a 35-percent tariff on tires imported from China, which raised, at least in the short term, by 20 percent or more on some budget tires (tiremakers have since, as predicted, moved to other countries for sourcing). However for high-end tires, more U.S. tires might be in the works; Yokohama recently announced that it will increase production of high-performance and truck tires at its U.S. facility in Virginia.