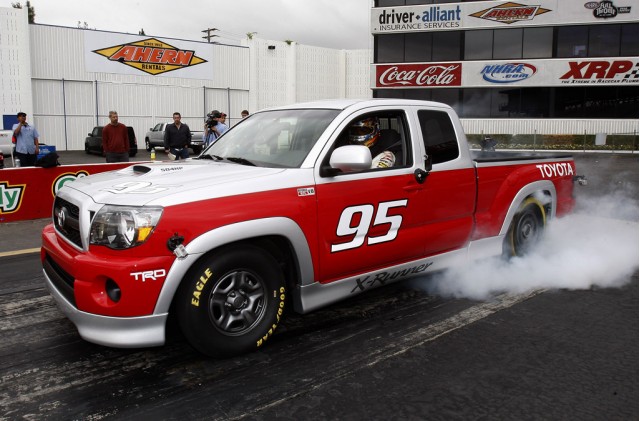 The annual Specialty Equipment Market Association (SEMA) show is quickly approaching its 2010 opening and in the lead up to the event Toyota has revealed details for one of the concepts that it plans to unveil. The new concept is the Tacoma X-Runner RTR (Ready to Race) pickup truck, which the automaker describes as a demonstration of its ability to develop a performance vehicle using its own range of in-house parts.

As a result, the Tacoma X-Runner RTR is a “parts bin” build with all but a few components currently available on Toyota products (traction bars and drive-line shaft are the only two non-Toyota parts).

Power comes from a completely stock, current-generation Tundra 5.7-liter V-8 engine, which is matched to a six-speed automatic transmission. A Toyota Racing Development (TRD) supercharger kit was added, bringing output to 504 horsepower and 550 pound-feet of torque.

To improve drivability, a narrowed Tundra rear axle, with a 4.3 ratio and 10.5-inch ring gear, was added, as well as a TRD prototype mechanical limited slip differential that was designed by Eaton. The truck rides on current generation Tacoma 15 inch styled steel wheels that were modified to 10 inches wide in the rear and wrapped by Goodyear Eagle Dragway Specials. The front wheels are 4.5-inches wide and mounted to Goodyear Eagle Front Runners.

Other modifications include a lowering kit, which drops the vehicle 4.5 inches, a custom exhaust system, and a new silver and red paint scheme applied by Five-Axis.

Look out for this wild Tacoma at this year’s SEMA show, which kicks off on November 2.