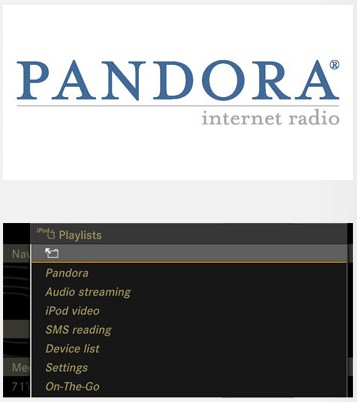 Mercedes has announced that passengers in some of their cars will be able to listen to Pandora streaming radio over the internet. Not only can you now stream Pandora through either an iPhone or Blackberry, but you can control the music with your steering wheel mounted buttons. One of my major gripes to date with Bluetooth streaming has been the lack of control using the car's interface. Using the steering wheel mounted buttons, you can toggle up and down to change songs.

Mercedes also is enabling the ability to play video content on the main display in the car. You will need a proprietary cable from your local Mercedes dealership that will plug into the Mercedes Media Interface.

For quite a while you have been able to listen to Pandora in your car. There have been a few different methods. Methods, ranging from using a simple auxiliary jack, to a dedicated iPhone and iPod connector. USB interfaces have started to become commonplace from the subcompact car to the luxury barge, many vehicles now have them as standard fare.

To stream audio your Mercedes must be equipped with the Mercedes Media Interface. Many models come standard with the interface while some models it is optional. If your Mercedes does not have the interface you can have on installed at the dealership for $298. While not exactly cheap, that is the price you pay for the latest and greatest technology.