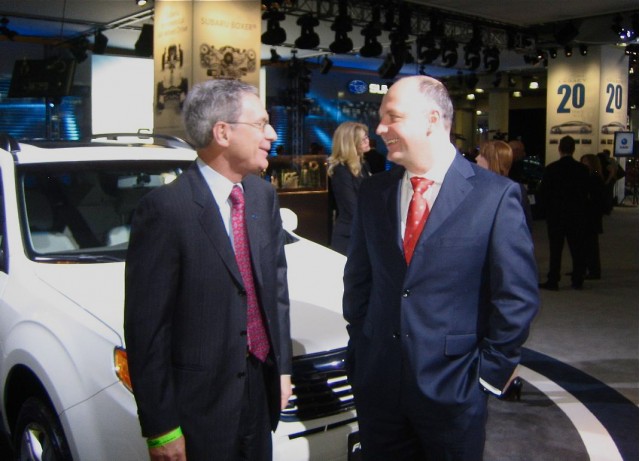 Last week, we told you about the 2011 Mediocrity -- a bogus new car at the center of a mysterious stealth marketing campaign. We'd seen some spy shots of the vehicle, then we stumbled across the 2011 Mediocrity Twitter page, which led us to the Mediocrity website. Which was pretty much where the mystery unraveled, because anyone who looked at her browser's address bar could tell that the campaign came directly from Subaru.

Stealth campaigns aren't common in the auto industry. They're better suited for advertising Hollywood blockbusters -- often horror/suspense flicks with mass-market appeal and mass-market affordability. But with few exceptions, cars aren't sold with suspense: they're about fun, power, safety, convenience, and occasionally sex appeal, but rarely mystery. Unless you're James Bond, mystery isn't that alluring in a car.

Not surprisingly, we had some questions about the Mediocrity campaign -- and thankfully, Subaru of America's Director of Corporate Communications, Michael McHale, was kind enough to answer them.

First, McHale gave credit not only to Subaru's marketing team, but also Carmichael Lynch agency. Together, they wanted to create an "interruption" campaign -- a marketing campaign that approaches the product in a roundabout way, stopping shoppers in their tracks. If you remember Subaru's commercial for Outback Detergent, you have an idea of what McHale is talking about.

The Mediocrity campaign began when mysterious spy shots landed at websites like ours. The car alone was ridiculous enough to tip off Marty Padgett to the fact that this was likely a marketing campaign. But Subaru wasn't done: a fake PR agent soon began sending out news about the Mediocrity. Apart from the quirky emails themselves, the agent was using a Gmail address, which raised a few more eyebrows. (Nothing's wrong with Gmail, of course, but it doesn't exactly scream "official corporate presence".)

Afterward came the near-simultaneous launch of the Mediocrity Twitter account, Facebook page, and microsite. McHale points out that they were meant to be almost real, but not real enough to fool anyone. If you've seen any Christopher Guest movie -- Waiting for Guffman, Best in Show -- you know the sort of spoof he was aiming for.

The campaign is now in full swing, with banner ads and such. We've heard that Subaru bought certain AdWords on Google, too: McHale hinted that if you search for certain "mediocre" midsize sedans, you might be served an ad for the 2011 Mediocrity. (Translation: Subaru annoyed Kia by using an Optima as the basis for the Mediocrity, and now they're gunning for Toyota.)

Of course this all has to be leading somewhere, right? And it does: right to the 2011 Subaru Legacy. You'll find a link to it at the bottom of most pages on the Mediocrity website.

Auto marketing is dominated by TV ads featuring cars and trucks on the road. Moreover, in our experience, most automakers take themselves pretty seriously. So, to see Subaru doing something that isn't car-on-road, something that forces a belly laugh? That's fantastic. However...

We still have issues with the campaign rollout. For example, why didn't Subaru (and Carmichael Lynch) spend the whopping $9.99 to buy a fake domain name and another $9.99 to host it, instead of spoiling the punchline of the Mediocrity campaign by hosting it at Subaru.com? McHale indicated that the joke was already fairly obvious, so they might as well fess up. But if you're going to spend that much time and energy building a fake campaign, why not go whole-hog?

Also: why such a short campaign? Last Friday, the campaign had been going for barely a week, but McHale said it would soon wrap up. At the time, the microsite had drawn 30,000 uniques in two days and 339 mentions online commentary -- not bad, but why not milk it a little longer?

And third: why launch the bulk of the campaign so late in the week? We didn't get to the Twitter/Facebook/microsite until the weekend of the 9th -- and for those not immersed in web traffic stats, weekends are always a low-point. Why not launch on a Tuesday and run with it throughout the work week?

In sum, our biggest disappointment is that the Mediocrity campaign was conceived to be so short-lived. It's well-done, insightful, and vastly different from most car campaigns -- we wish it would stick around a bit longer, if only to keep us laughing.