How GM Didn't 'Lie' About The Volt, And Why The Press Is Wrong 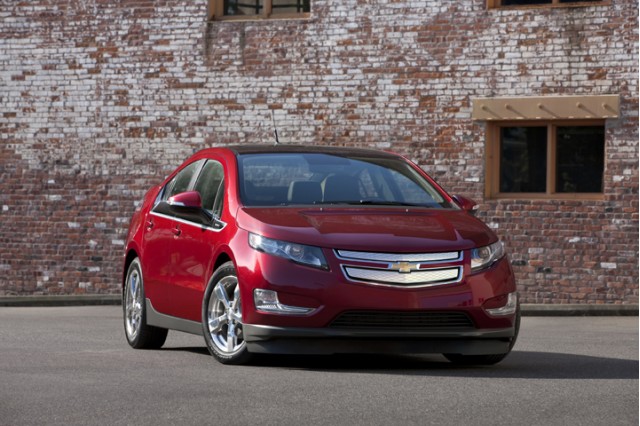 You may have seen this morning's media frenzy about General Motors' "lie" about the Volt's ability to directly drive the wheels with its range-extending gasoline engine. What you may not know is that the publications screaming "lie!" are doing little more than running self-serving, tabloid-worthy headlines.

I'm not typically a fan of electric cars, at least in their current states of being. A car that can't go from one town to another across the desert Southwest, or which sees drastically reduced performance depending on the weather isn't really a car, in my book. It's a toy, a status symbol, a raised nose at the "gas guzzlers" that drive by on their way to some distant destination. But the 2011 Chevy Volt doesn't fall into that trap.

What the Volt isn't
In addition to driving 40 miles on nothing but electric power, it carries its own generator on board, making the non-existent national charging network irrelevant. And, as we learned today (though we had off-the-record hints several months ago from some of the Volt's top team members) it can also use the onboard engine to add some direct power to the wheels once the battery is depleted.

For a person that likes cars, appreciates efficiency, and couldn't care less about the definitional semantics the rest of the press is engaged in, that's fantastic. Is it a pure EV? Yes, for the first 40 miles. After that, no, it was never intended to be. Is it a hybrid? Not really, as it can run at highway speeds on nothing but electricity for its stated range of 40 miles, and falls back on mechanical drive power only under certain conditions, which is sort of the inverse of a typical mild hybrid. A plug-in hybrid? Sort of, if you don't mind blurring a few lines.

The question you might be asking now is, "What, then, IS the Volt?" There's an answer for that, but first we need some background.

The "lie"
Sampling the buff book testing, since they got their hands on it early and started the "GM lied" hysterics, the Volt is a family sedan that's capable of real-world mileage in the 30-40 mpg range over a week's period without any recharging. In other words, the first 40 miles aside, the range-extending system delivers performance about on par with real-world results from the Toyota Prius, Honda Insight, Ford Fusion, and other comparable hybrids.

The problem the buff books (and a few online outlets parroting their stance) have with the newly-announced ability of the Volt to supplement power with mechanical energy directly from the on-board 1.4-liter four-cylinder, is that it's no longer purely electric power driving the wheels.

This is a distinction without a difference. You can burn gasoline to spin a generator to charge the batteries to power the electric motors, or you can partially skip the middle man and send some of that gas-generated power straight to the wheels. Either way, gas is burned to turn the wheels.

We've tried to contact the Volt team to clarify whether sending enough power from the range extender to the batteries to enable pure electric highway cruising would have necessitated more expensive circuitry, more elaborate cooling, or other elements that would put the car out of its target cost range, but they're understandably swamped at the moment. We think it's a reasonable assertion, but we'll update you with the official word from GM as soon as we can.

Let's take a look at some of GM's statements that are ostensibly the source of the "lie." Inside Line cites lines like "The Chevrolet Volt is not a hybrid. It is a one-of-akind, all-electrically driven vehicle designed and engineered to operate in all climates." This statement, in light of the ability of the Volt to add direct drive from the onboard engine, isn't strictly speaking, true. But is it a lie? The Volt is all-electric at any speed for the first 40 or so miles. It's all-electric in charge-sustaining mode at speeds below 70 mph. In only one circumstance (speed-limit or higher highway driving) does it augment electric drive with mechanical. And even when the mechancial engine is kicking in some power the wheels are simultaneously being driven by the electric motors. If it's a lie, it's not one of omission, but of addition.

Jalopnik goes on to construct a quotation from Volt chief engineer Andrew Farah with a strictness that would set even Antonin Scalia's teeth on edge. Quoting Farah saying, "you're correct that the electric motor is always powering the wheels, whereas in a typical hybrid vehicle the electric motor and the gasoline engine can power the wheels. The greatest advantage of an extended-range electric vehicle like the Volt is the increased all electric range and the significant total vehicle range combined," Jalopnik responded with "This meant that the gasoline engine was nothing more than a 'range extender' designed to charge the batteries which would allow the electric drivetrain to continue to move the car — and allow GM to claim that the Volt was something different, something new and something worthy of taxpayer dollars. It turns out that's not correct."

Actually, that is still correct. It just does something in addition to Farah's remarks.

What the Volt really is
So what is the Volt? For the first 40 miles (and every 40 miles after that, if you're in the target market sweet spot) it's a pure EV. If you want to treat it as such, it's simply a battery EV with a 40 mile range and a lot of extraneous hardware. Unlike the LEAF or any other number of battery EVs, it won't leave you stranded if you get out too far without an outlet nearby. And unlike any mass-market hybrid, you can simply charge it each night and go about your 40-miles-or-less daily business without ever dipping into the world's diminishing supply of dinosaur juice.

Instead of either the battery-only EVs or the standard/plug-in hybrids, the Volt takes a scene from the heavily-sponsored Transformers movies and becomes an EV that generates its own charge from an on-board generator. Drive it around town, it's still powered purely by the electric motors. It's still an EV, just drawing its power from its own portable grid. Remember--the grid the LEAF and all other EVs pull their power from burns a considerable bit of coal to produce that electricity, too, but you can't put a coal-fired powerplant in the back of a LEAF. Sure, the gasoline engine isn't as efficient or as clean as a powerplant, but now we're talking differences of degree, not of kind.

But imagine now that your Volt has run out of its battery power, and your return trip necessitates some highway driving. Instead of saying "no sir, charge isn't high enough for highway speeds," the system dutifully kicks in and adds a little boost from the combustion engine, allowing you to flow with traffic rather than being an eco-friendly rolling road block. Convenient, confidence-inspiring, and, by the way, something none of those other EVs can do.

Why wait until now to tell us?
So if the Volt's ability to partially drive the wheels through its on-board engine is actually a very useful feature, why did GM hide that fact? The answer lies in patent applications and corporate competitiveness. If GM had laid all its cards on the table at the outset, you can bet Toyota, Honda, Ford, and others would have been hard at work getting a similar concept built before GM could patent the design. The patent acquisition took time--understandable to anyone who knows anything about the patent process. The result? A (relatively) late-in-the-game announcement of the enhanced drive capability.

But GM almost certainly wasn't expecting this sort of negative reaction, particularly from the ostensible enthusiasts at the buff books. In fact, in my interview with Rob Peterson back in June, we touched on this very subject as rumors of a direct-drive solution for the Volt's European cousin, the Ampera, had emerged. He stated only that the Volt would operate purely in electric mode for the first 40 miles, driving at any speed without aid from the combustion engine. As for the possibility of direct drive under other circumstances, Peterson played coy due to the ongoing patent application, but stated clearly that the Volt's powertrain is a "very innovative solution," and that there is "no rush on our part to tip our hand to our competitors." He even said we could expect a good surprise or two as the Volt neared production. We think this is one of them.

Semantic sand castles
Does that mean it's not an all-electric car the rest of the time? No. It just means that in addition to being an all-electric car, it has some hybrid-like capabilities. So Chevy delivers an EV with 340 miles range and adds in a power boost to maintain highway speeds even when the battery is discharged...and the media complains about it? This does not compute.

Put another way, if you drive your LEAF toward the end of its battery range, even if you have a charger waiting at the other end of the road, it'll stick you in a speed-limited "limp home" mode. The Volt's "limp home mode" lets you drive on the freeway at the cost of a little electrical purity. The arbiters of Green Morality may cringe, but at least you'll make it home in time to get the kids to soccer practice.

The "GM lied" fanatics can build their semantic sand castles and kick down GM's own all day long, but at the end of the day, this "lie" means the Volt is more capable than any other vehicle in its class. Is a flashy headline really worth dragging what may be the best EV/hybrid/futuremobile/whatever through the mud over a case of dubitable nomenclature? Apparently, to some, it is.