Google Gets Behind The Wheel With Self-Driving Prius 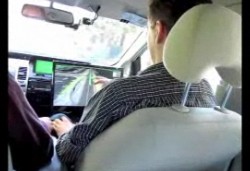 Google has jumped into the driver's seat. Really.

The Silicon Valley company has revealed some details of a self-driving car project that it's been recently testing out in plain view, on normal streets and highways.

The Google cars have already been tested for about 140,000 miles—with much of that on public roads. Testing even included one 1,000-mile trip with no human input, as well as a trip down a stretch legendary for its steepness and twists, Lombard Street in San Francisco—as well as curvy California Highway One between there and Los Angeles.

And it's legal, says Google. They studied up on California vehicle law and found that as long as the 'driver' in the vehicle can override the systems' errors, they could test it on public roads.

Google claims to have had no accidents yet with the project, except when one car was rear-ended.

Over several decades, a number of automakers and researchers have worked on self-piloted vehicles, though most of these projects have taken place either within a proving ground or test facility, or along a particular test stretch of highway.

Google gave the New York Times a recent demonstration—which began at Google's Mountain View, California, campus and included a merge onto busy freeway traffic, followed by an exit onto city streets with stoplights and crosswalks. The system alerts the human in the car when approaching crosswalks or about to make a turn, but otherwise pilots itself, and can be programmed to be cautious or aggressive.

The Google setup likely makes the test Prius look a bit like a police car from a distance, with a rotating lidar sensor that gets a three-dimensional map of surroundings; a video camera to see moving other moving objects; a position estimator; and several radar sensors.

The company has no clear business plan yet for the technology—a statement that's almost expected for the company, which is known to greenlight projects for inspired scientists and engineers, then find out how to make money from it as a secondary step. So far, the strategy has worked well. According to the New York Times, Google co-founder Larry Page and developer Dr. Thrun share a belief that robotic vehicles could increase safety and reduce energy costs.

As the NYT suggests, there are plenty of legal and ethical questions to be answered before autonomous vehicles might become a reality—such as whether the person in the driver's seat would need to be paying attention at all times, and in the case of an accident, would the occupant or the writer of the software be held accountable if something had gone wrong?

Ultimately, when further developed, the project could be used to help solve distraction issues—perhaps taking control when the driver is sleepy or doing something they shouldn't be doing behind the wheel, like eating, drinking, or texting. And ultimately, it could save lives.