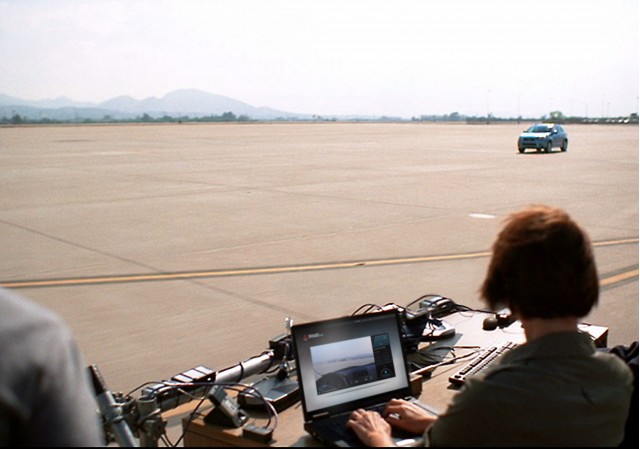 Mitsubishi has lined up the opportunity for virtual test-drives of its new 2011 Outlander Sport. And no, we're just talking about another tilt-and-pan virtual showroom feature, or some Need for Speed–style game backdrop.

"Participants will enjoy the feeling of literally being in the driver's seat," according to Mitsubishi. "The experience gives the driver almost total control over the Outlander Sport."

The idea is a teenager's dream come to life; and for car buyers who grew up on Wargames and Knight Rider it's one of the most interesting marketing stunts we've seen. No word on hardware or bandwidth requirements, though.

There's also a game aspect to it; drivers will be challenged to gather "feature pods" that teach about the vehicle's amentities.

The Outlander Sport is a new model for 2011; though based heavily on the Outlander, the Sport is shorter and more maneuverable, with room for five, a more economical standard 2.0-liter four-cylinder engine, and an affordable $18,495 starting price. But for those interested, a 710-watt Rockford Fosgate sound system, hard-drive music storage, and a nav system with real-time traffic are all on the options list, along with all-wheel drive.

And although the remote-control Outlander Sport might make an interesting driver's ed car someday, for now the offer is only open to those 18 and older with a valid driver's license.

To register for the 'test drive' opportunity, beginning October 15 you can sign up at www.outlandersport.com, where you'll get a code to be used for the live test drive November 1.