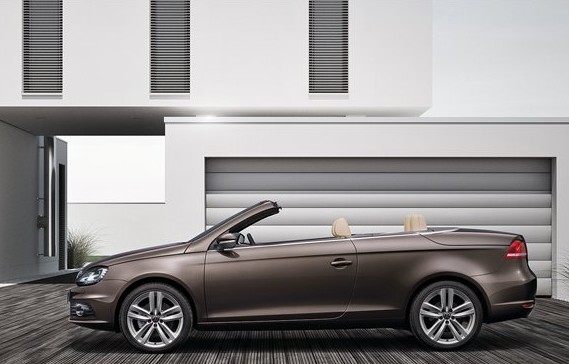 The first photos and product details of the 2012 Volkswagen Eos have surfaced, a few weeks before its official debut at the 2010 Los Angeles auto show.

The new hardtop convertible goes on sale early next year with moderate updates to its styling and its interior. The front end now wears the slimmer grille seen on the new 2011 Volkswagen Jetta and the updated Golf hatchbacks; LED running lights and new fog lights are fitted. At the back, the Eos' taillights have been squared off.

The interior has been revised to play up the center stack of controls. New materials are said to give the Eos a higher sense of quality. A new steering wheel has been specified, too.

The 2012 Eos adds parking assist and pushbutton start. The hardtop roof can be lowered through the keyfob.

The slow-selling Eos (the name is from ancient mythology's goddess of the dawn) will keep its turbocharged, 207-hp, 2.0-liter turbo four and its dual-clutch transmission.

VW has yet to confirm options and pricing for the U.S.--so stay tuned @carconnection on Twitter or at TCC's Facebook page for updates.