Do They Know Something We Don't: Automakers, Auto Insurance Ad Spending Soars 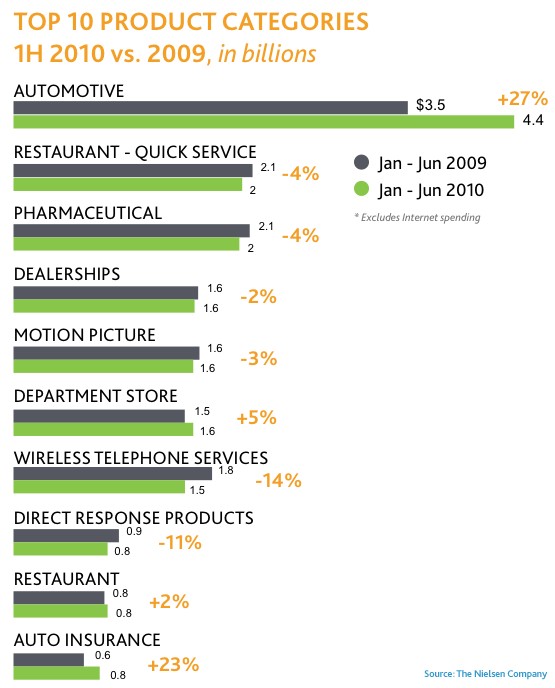 Nielsen's top ten ad categories for the first half of 2010

Nielsen's top ten ad categories for the first half of 2010

During tough economic times, companies often cut back on marketing -- in fact, advertising budgets are frequently the first to shrink when danger looms and the last to expand once the coast clear. As a result, some analysts see ad spending as the equivalent of the canary in the mine shaft: a sign of whether things are good, bad, or ugly.

Nielsen's latest advertising survey doesn't offer easy answers about the state of the U.S. economy, but it does show that automakers and auto insurance companies are bullish about its future. Of the ten biggest product categories, most scaled back on ad spending during the first half of 2010. Movies cut by 3% compared to 2009, fast food joints by 4%, and wireless phone services by 14%.

Automakers, on the other hand, spent $4.4 billion on buying ads in U.S. media -- a staggering increase of 27% over the same period in 2009. Auto insurance companies beefed up their budgets, too, jumping by 23% to $800 million.

That would seem to indicate that the economy is on the rebound -- well, except for a few small problems.

First, these figures date from the first half of 2010, when economists were rosier in their recovery predictions, and when folks on the street were ready to talk about something other than the recession. Over the summer, however, the future became a little less bright, and although most analysts think we'll avoid the much ballyhooed double-dip, we ain't out of the woods yet. Most of that bearishness happened after these figures were pulled.

Another curious thing: auto dealerships didn't land in the plus column. In fact, dealerships cut back on ad spending by 2%. That's not a huge reduction, but compared to the double-digit increases from automakers and insurance companies, it seems noteworthy. By definition, dealerships are closer to consumers, and they might've been seeing trends among shoppers that the automakers themselves weren't.

Then again, let's not forget that General Motors and Chevrolet both eliminated a number of dealerships from their network between 2009 and 2010 -- slightly under 2,000 in total, at last count. And it would stand to reason that fewer dealerships necessarily means fewer dollars being spent on advertising. Unfortunately, here's not an easy way for Nielsen to compensate for that in compiling this straightforward data. If we were to take a look at per-dealership spending, though, we might actually see an increase, given that the total drop is so low.

Bottom line: the economy is still fuzzy, consumers are still wary, and the auto industry (automakers, dealers, and insurance agencies) is still responsible for most of the advertising in America. Maybe we'll have a clearer picture in a few months, when Nielsen releases results for the second half of 2010.