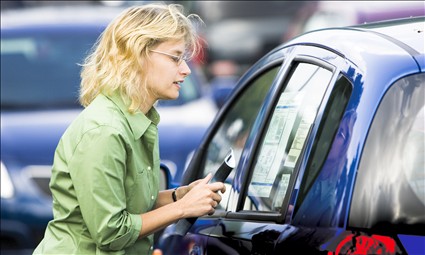 Ever since Baby Boomers came of age in the late 1950s and 60s, America has been obsessed with youth culture. Each week, it seems there's a new report talking about the spending power of Millennials or Tweens  or some new, even younger demographic. But when it comes to cars, young people are just kid stuff: according to a new study from AARP Media Sales and J.D. Power and Associates, it's the 50+ crowd that really spends the dough.

The data from that study (see below) reveals some very interesting news. At first glance, we see that shoppers 50 and older account for a whopping 62.5% of all new car sales. That in itself is impressive, but doubly so when you consider that just ten years ago, that same demographic accounted for less than 39% of new cars sold. That's a surge of over 20% in nine years. What's more, a huge chunk of that is due to the 65+ crowd, who make nearly 24% of new car purchases. 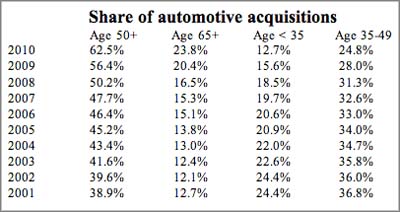 Chart from AARP Media Sales, in conjunction with J.D. Power and Associates

At the other end of the scale, shoppers under 35 used to account for almost 25% of showroom sales, but today, that figure has slipped to 12.7%. Even the highly coveted 35 - 49 year-old segment -- the demographic characterized by growing families and high earning potential -- has slid to less than 25% of marketshare.

All this goes to show who's fared well during the economic downturn and who hasn't. While many younger Americans don't have the income or reserves to spend on a new ride, older shoppers are capable of laying cash on the barrelhead. (We mean that literally: the study found that 33% of buyers over 50 paid for their cars in cash.)

Of course, there are a few sticking points with the study. For one, the study was carried out in part by AARP Media Sales, which is part of the AARP family, which depends on the 50+ market. Proving the potency and value of older Americans is pretty much the AARP's job description, so to see the AARP put together a study proving the potency and value of older shoppers...well, it's to be expected.

Also, there's no word on how many 50+ adults are buying cars for their kids -- though even in those cases, it's still the adults who are doing the buying. (Mary Kate and Ashley may have some say in the color of the twin MINIs that mommy buys them, but she's the one signing her name on the dotted line.) The figures might also shift somewhat if the study were re-done with used car sales, but for now, the 50+ crowd is tops.