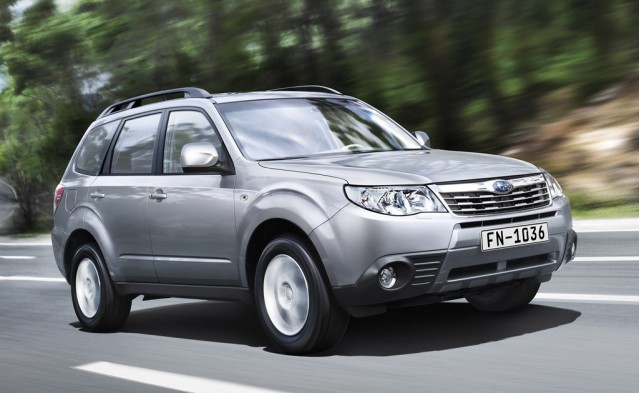 A new engine and a few new features are what's new in the 2011 Subaru Forester. While the hot-selling compact crossover wagon isn't that much different from the 2010 model either inside or outside in appearance, all but the turbocharged Forester XT are significantly different under the hood, where a all-new version of Subaru's horizontally opposed ('flat' or 'boxer') four-cylinder engine provides power.

The new 2.5-liter DOHC boxer engine doesn't make significantly more power than the previous engine, but it does have improved fuel efficiency—up to ten percent better, Subaru has said, for this engine, which will be introduced eventually throughout the brand's lineup. The new engine has a lower-maintenance timing-chain system instead of timing belts, and Subaru will likely mate it with the brand's CVT automatic in upcoming applications, further improving fuel economy. EPA ratings are improved by about one mile per gallon in the new 2011 Forester, to 21 mpg city, 27 highway.

Otherwise the '11 Forester is little-changed. A new grille design has been introduced, and the instrument panel has been given a softer, textured material.

Price hikes are a modest $200 to $500 over comparable 2010 models, but standard-feature content has been improved—specifically, with better audio and connectivity features. The lineup is much the same as before, with base 2.5X, 2.5X Premium, 2.5X Limited, 2.5X Touring, 2.5XT Premium, and 2.5 XT Touring models. For the 2.5X Premium trim, a new 17-inch alloy wheel design has been added, along with standard Bluetooth, Bluetooth Audio Streaming, iPod connectivity, and a USB port—plus Sirius Satellite Radio and steering-wheel audio controls. And on the Limited, in addition to those features, HD Radio, six upgraded speakers, a back-up camera, and 4.3-inch display screen have been added.

Top Touring models are again distinguished by their HID headlamps, bright roof rails, dual-zone climate control, one-touch folding rear seatbacks, and electroluminescent instruments. This year, you can get the top Touring trim with either engine.

A new TomTom navigation package is being offered for just $595 when paired with the All Weather Package. A big seven-inch touch-screen nav system also remains available for $1,800.