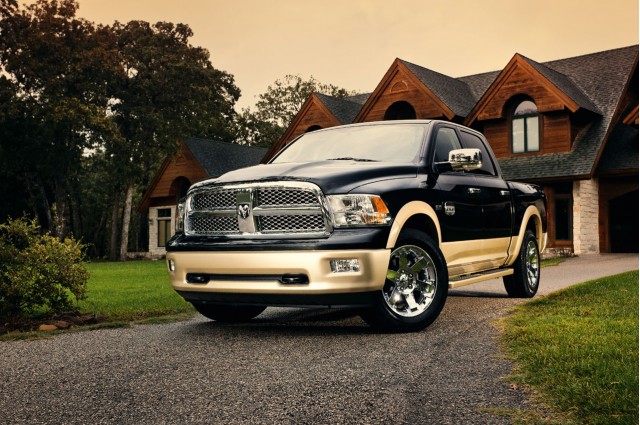 It's the most luxurious Chrysler truck ever built, it shares a name with steak we love, and it looks like it's taken a backstage tour through Gretchen Wilson's wardrobe racks. What exactly are we not supposed to love about the Ram Laramie Longhorn ambling down some unnamed dusty trail for 2011?

We'll figure that out later. For now, the details on the Laramie, which takes a bow and probably some encores today at the Texas State Fair.

For starters, it's not limited to one Ram model--you can have it on Ram 1500, 2500 and 3500 trucks, whatever you choose. All versions get many Laramie Longhorn badges inside and out, but it's the seatback pouches (complete with buckles) that take the country-and-western cake. The RLL trucks come in either a dark brown leather or light grey leather treatment, and on either, you get awesome seat stitching that would fit snugly on the lower back of any of the SHEDaisy ladies. We're not calling it a tramp stamp, per se, but it sure is aspirational.

Big 20-inch wheels are chromed on 1500 models; the 2500 and 3500 versions have polished aluminum wheels. LED lighting glows brighter than flickering lighters in Cowboy Stadium, and a standard navigation system makes sure you can make your way out of that new billion-dollar boondoggle without asking for directions. The RLL trucks also get standard remote starting, a rearview camera, ventilated front seats and heated rear seats.

There's no word on the price premium, but you've got time, since the Ram Laramie Longhorn won't go on sale until the first part of 2011.

Oh, and whatever you do, don't call it a King Ranch. Honest mistake, but still.