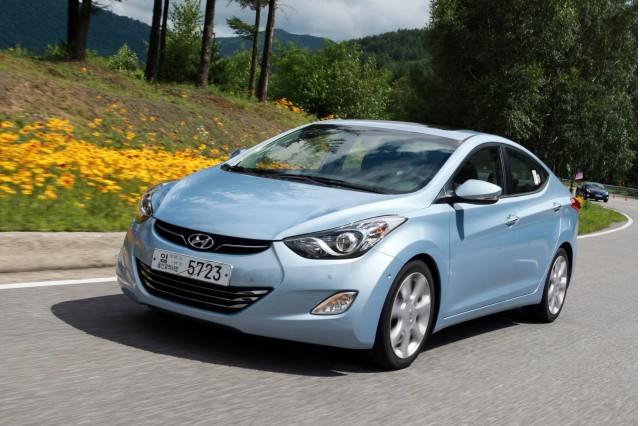 The 2011 Hyundai Elantra has been developed in South Korea, and is being adapted for the American market by the automaker's California-based marketing arm.

Now, the Elantra is headed for production in Montgomery, Alabama, alongside the company's brisk-selling Sonata large sedan. Sources in South Korea confirm the Elantra move to the U.S. to High Gear Media, and prototypes of U.S.-built Elantras have been spotted during testing on American roads.

The 2011 Elantra adopts some of the same styling themes that have helped turn the Sonata from an also-ran in the family-sedan market into a strong player. This year, Sonata sales have increased by 50 percet, and it has moved into a race with the Nissan Altima to become the third-best-selling large four-door on the U.S. market, behind the Toyota Camry and the Honda Accord.

Hyundai and Kia have been realigning U.S. production to accommodate the Elantra move. Earlier this summer, Kia announced that the Hyundai Santa Fe would shift production from the Alabama plant to the Kia-branded facility that churns out the Kia Sportage in West Point, Georgia. That move opened up the potential for more Sonata production--and for Elantra production as well.

Hyundai is reaching into more sales segments as it pushes for global growth and aims to be one of the world's top five automakers by the end of the decade. The new 2011 Equus luxury sedan is sized to compete with the likes of the Mercedes-Benz S-Class and the Lexus LS, but is priced from about $55,000.

The Elantra currently is offered in sedan and Touring wagon versions. A return of the wagon is expected, but it's not clear if the wagon will also be built in Alabama, or if the low-production version is better left on a South Korean assembly line.

Alabama-built Elantras will go on sale late this year, as Hyundai preps for another new-vehicle introduction at the 2010 Paris Auto Show next week--that of the production version of the Veloster, a sporty coupe concept that has the VW Scirocco in mind.

An official announcement from Hyundai is due this morning.