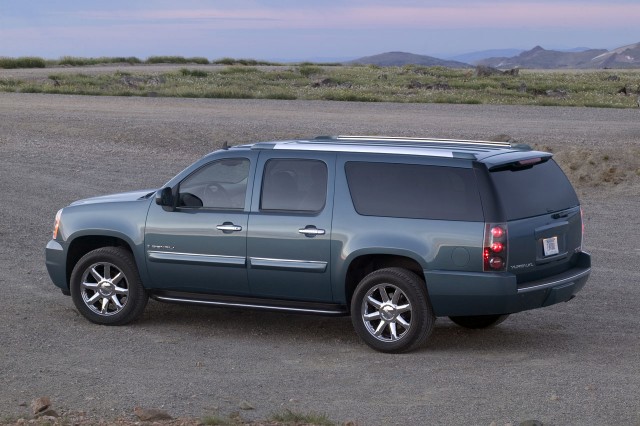 If you're shopping for a serious people hauler, and by that, we mean one that can both carry several adults in comfort, as well as tow a boat or a horse trailer—you might consider one of the full-size (read: heavy duty or super duty) pickups.

Or, for even more passenger comfort, take a look at the 2011 Chevrolet Suburban 2500 or 2011 GMC Yukon 2500 XL, which combine almost HD-like towing and payload upgrades with the same comfortable interior appointments as the other Suburban and Yukon models.

But for 2011, if you head out to the lot to browse these trucks, you might notice one change: They're no longer exempt from EPA fuel economy ratings. This year, the numbers will be on the window sticker, just as for light-duty SUVs, and you can cross-shop them. They'll also be listed both at the EPA's portals, FuelEconomy.gov, and the Green Vehicle Guide.

The new rules catch up with the classification of "medium-duty passenger vehicles" that was created a number of years back, to include those vehicles with GVWR numbers up to 10,000 pounds. At the time the decision was made, the Ford Excursion and Hummer H1 would have also fit into this category.

While this new rule applies to utility vehicles, heavy-duty pickups with a GVWR in that 8,500- to 10,000-pound range range—like the Dodge Ram Heavy Duty 2500, the Chevrolet Silverado 2500HD, and Ford F-250 Super Duty—are still exempt, even though many of these trucks are used in the same way as the Suburban. The Suburban 2500 has a GVWR of 8,600 lb.

This this change isn't actually related to the pending federal fuel economy rules, will require a 34.1-mpg federal average by 2016, and it actually has no impact on Corporate Average Fuel Economy (CAFE). At least, not yet.