Attention Car Shoppers: Get Vehicle Values To Go (If You're Lucky) On NADAguides.com 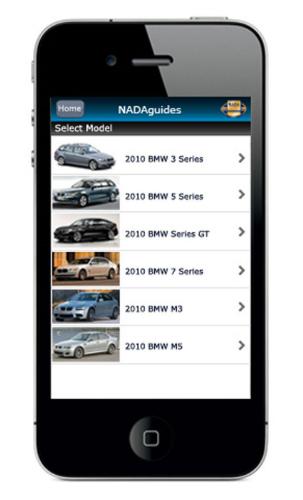 In days of old, research-minded car buyers would toddle into showrooms armed with brochures and Blue Books and printouts of web pages. But for today's savvy shopper, it's all about the smartphone.

There are lots mobile apps to help buyers determine the value of trade-ins and purchase models -- KBB.com being the most notable. If you're a customer of USAA, there's even an app to help secure purchasing for your new ride. Now, the National Automobile Dealers Association hopes to make a splash on the smartphone scene with NADAguides.com, which has recently been optimized for mobile browsers.

Start by pulling up NADAguides.com on your phone. (The press release says it's designed for the iPhone, but unless it's Safari-specific, other smartphones may be able to use it, too.) You'll see two buttons -- one leading to the regular site, the other to the mobile version. Click the second button, head down the rabbit hole, and voila, you're confronted with a straightforward, intuitive interface that should help you find the trade-in or sale value of your current ride, or the fair price of a new one.

Unfortunately, the site has a couple of shortcomings. First and foremost, it's a mobile site, not an app, meaning that it'll be slower to use on actual auto lots because it has to access the web for information. Apps like KBB's, on the other hand, store much of their data locally, making them a quicker resource for info on the go. NADAguides does have an advantage, though, in that its pricing database is constantly updated via the website, rather than via an app update that users have to download and install.

Finally, we found a couple of instances in which certain models and years weren't listed on the mobile version of NADAguides.com. That's a little odd, considering that the mobile site presumably draws from the same online database that powers its regular site, which jam-packed with info. But it's true: pull up Aston Martin on the desktop version, and you'll see a slew of year-make-model options. On the mobile version, only one model is mentioned, and it's from 1999. If this were an app, we could understand the discrepancy, but this is just a streamlined version of a website. CMSes like WordPress do this sort of optimization automatically, so you'd think NADA's fine corps of engineers might be able to figure it out.

But let's not go out on a down note. In its press release (pasted below), NADA says that there'll be a mobile app for NADAguides before the end of the year. We hope that can fill in some of the blanks.

"The demand is obviously here and our mobile site (the first of several mobile products to launch from NADAguides) will address the need for instant mobile access to NADAguides car pricing and content," states Don Christy, Jr., President of NADAguides. "We will deliver our information on many platforms, starting with the iPhone, soon to be followed by other popular devices and applications.  We consider ourselves a data and technology company with our sites on what consumers want and need now and in the future.  It is our responsibility to provide them the content and information they need to better assist with their car shopping process."

To access the site, visit www.nadaguides.com on a mobile device to be automatically redirected.

NADAguides will again expand its mobile offerings in the coming months with a feature-rich iPhone App available through the Apple iTunes store and more to come later in the year.