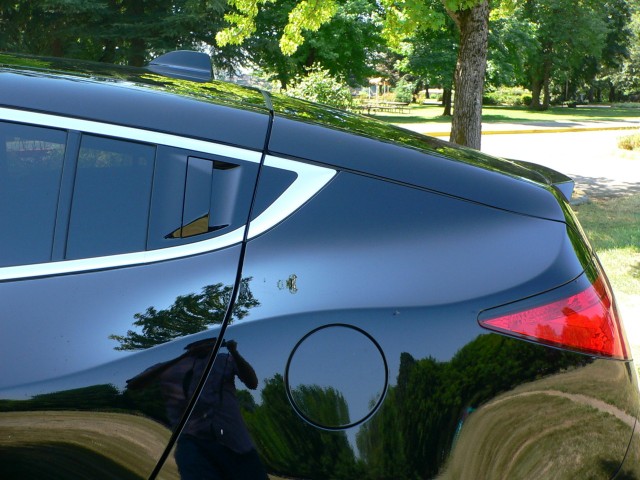 A week with a ZDX still wasn't enough to help me make up my mind about a few key questions: Is this a good-looking vehicle? And does the whole package work?

Ask me at various points in the week, and depending on the angle I was viewing it from at the moment my responses could be very different.

Curves and surfaces to behold

From-a-distance shots don't always do the design justice; there's a lot going on with surfaces on the ZDX, and while there aren't a lot of creases and character lines, it's a curvy beast—accentuated by glossy, convex-mirror-like black paint on the test vehicle. Which makes the sharp, angular look of its front and rear details clash a bit when you see them together with the organic, flowing middle of the vehicle. Again, sometimes it's a good thing, sometimes it's not.

The ZDX shares its underpinnings with the MDX crossover, yet that more carlike profile might even lead some to think it's related to the Honda Accord Crosstour. To compare the two, the ZDX is a few inches shorter, lower and wider than the Crosstour. The other vehicle that the ZDX compares most to is the BMW X6; it's about exactly as long and wide, but several inches taller than the Acura. Squint a little bit at the ZDX, and you might be able to filter out the 'hidden' back door and see a coupe—that's the affect designers were attempting.

Mostly, we're pretty thrilled with the way the ZDX drives. Under the hood, there's the same 300-horsepower, 3.7-liter V-6 as in the MDX, paired with a six-speed automatic transmission. You get steering-wheel paddle shifters. All is well with the way the ZDX steers and handles; for having MDX underpinnings, it's surprisingly sporty and composed, even when the road isn't.

Ride quality, however, is the tradeoff; while the ZDX rides with sort of muted heft, the ride is still quite jiggly, even in the Comfort mode of the Integrated Dynamics System (IDS), which changes the steering calibration slightly and smoothes out the response of the active (magneto-rheological) damper system. Changing from comfort to sport didn't really affect ride quality that much, except over the largest heaves, such as speed bumps and in corners where the ZDX was really pushed to lean.

About the only other driving issue we dwelled on it that there's a little bit of a flat spot at moderate throttle; we couldn't tell if it was the engine or the transmission, but if you need just a little more power, going past that point invites drama and downshifting. But floor the gas from a standstill or pretty much anywhere, and the drivetrain is remarkably quick yet unobtrusive, with the transmission then shifting crisply but muted, right up at 6,700 rpm, and the SH-AWD system expertly finding traction without even a screech.

The ZDX gets an EPA-rated 16 mpg city, 23 highway—which isn't all that impressive, but if our driving experience was any indication, you're likely to see the upper end of that. We saw 19 mpg over a week and about 100 miles of short trips and around-town stop-and-go.

In our full review of the 2010 ZDX, editorial director Marty Padgett did a great job pointing out the obvious compromises of this vehicle, noting that it is "less practical than a real SUV," as well as "too tall to be a real coupe."

Try to fit more than two larger adults in the ZDX and you'll see what he means. While there's plenty of legroom, and a tall airy-ness to the cabin, front headroom was just barely adequate for this 6'-6" driver. In back, forget about trying to fit anyone approaching six feet tall; there's just not enough headroom, and the curvy shape makes the backseat a lot narrower than you might expect. The odd shape and short dimensions of the doors in back make getting in and out difficult, too. Visibility is tough, with huge blind spots, but straight back there's a smaller back window built into the hatch. It helps a little bit.

There are other alternatives, for those who like the idea of a hatch in back but need backseat room. BMW 5-Series GranTurismo gets some of the ZDX's fastback looks, yet the backseat in the GranTurismo is positively limo-like—an improvement over the 5-Series sedan or X5 and on par with the back of the 7-Series.

Shallow hatch is a compromise

Cargo space really isn't that bad in the ZDX. The cargo floor is surprisingly high, but you'll find a deep, additional storage area under the regular cargo floor at the back. But then again, be aware that nearly anything that you put back there will infringe on your rearview.

Yet with all the tradeoffs, the ZDX's two front perches offer top-notch luxury. Interior trims and materials (including soft leather with accented stitching) are remarkably good; the instrument panel has a stunning, wrap-around design that really does combine the utility (with all sorts of cubbies and bins) of a utility vehicle with the wrap-around cockpit feel of a coupe. The surround-sound system in the ZDX was bassy and rich yet clear at higher volumes, and it has DVD-Audio capability Bluetooth Audio streaming, as well as USB and aux inputs. We weren't as wowed by the navigation system, though we liked the display.

Ultimately, the ZDX is a limited-appeal vehicle. We can see urbanite antiquing types or gallery owners considering it; or empty nesters with a larger vehicle.

But for the majority of us, up close or from afar, perhaps the ZDX is best left just admired.