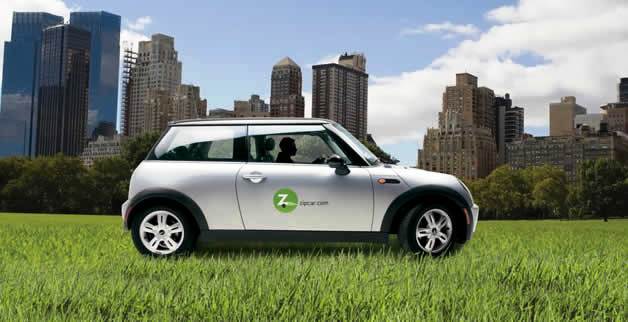 If you live in an urban area, you've probably fantasized about ditching your car. It's to be expected, given all the traffic and construction detours and clueless pedestrians and parking hassles. But kicking the car habit is tough, and if you're serious about it, you may need help. To make the transition a little smoother, Zipcar is preparing to launch its third annual "Low-Car Diet" challenge tomorrow.

The gist of the challenge is pretty simple: let your current vehicle collect dust for 30 days. When you need to get to work or shop for groceries or take the kids to school, try something different: walk, ride a bike, take public transportation, or, if you're really desperate, grab a set of wheels off the Zipcar lot. (Hey, they gotta make money off this promotion somehow.)

According to Zipcar's most recent press release about the event, the Low-Car challenge has been effective in the past:

The fun/terror begins tomorrow, September 14. To participate, just visit www.zipcar.com/lowcardiet and fill out the "Low-Car Diet" registration form. In exchange, you'll receive a Zipcar membership and an assortment of healthy snacks to commemorate the start of your new, putatively healthier lifestyle.

The challenge is open to anyone, though you'll obviously reap the most benefits if you live in an urban area with Zipcar outlets -- namely, Atlanta, Baltimore, Boston, Chicago, New York/New Jersey, Philadelphia, Pittsburgh, Portland, Seattle, Toronto, and Washington, DC, as well as Vancouver, Canada, and London, England. If you're afraid to make a full, 30-day commitment, you can take part in the challenge without officially signing up, but then you get no snacks, and who doesn't love snacks?

For more details, we've included the full press release below. Good luck to all those participating. As Bonnie Franklin used to say, take it one day at a time.

participants from across the u.s. and canada encouraged to get smart about alternative transportation options by giving up their cars for 30-days

CAMBRIDGE, Mass., Sept. 8 /PRNewswire/ -- Beginning September 14, 2010, participants in Zipcar cities across the United States and Canada are taking on the world's largest car-sharing services' third annual Low-Car Diet.  In six days, participants will pledge to personally give up their vehicles for 30 days and find other ways to meet their transportation needs.

Participants nationwide will be given a Zipcar membership and other incentives from national partners including popchips™, KIND Healthy Snacks, Honest Tea®, Stretch Island® Fruit Co. to make their experience convenient, fun and rewarding. To reap the economic and environmental benefits in your city, join Zipcar's Low-Car Diet today by signing up at www.zipcar.com/lowcardiet.

The Low-Car Diet encourages participants to take on a smarter lifestyle and consider alternative transportation options rather than using their personally owned vehicle.  Consider the following:

"With the unemployment rate holding at 9.6 percent and the average U.S. household spending nearly 19 percent of their income on transportation, smart consumers are looking for alternatives to owning a car," said Scott Griffith, Zipcar Chairman and CEO. "This year's Low-Car Diet asks drivers to experience Zipcar and the concept of car sharing for what it really is – a way of life – and we hope participants realize what our 400,000 members already have: you can have all the freedom and benefits of car ownership without the expense or headaches of owning a car."

This year, Zipcar is hosting kickoff events and end-of challenge celebrations in Atlanta, Boston, Chicago, New York, Philadelphia, Pittsburgh, Portland, San Francisco, Seattle, Toronto, Vancouver and Washington D.C. Those who rise to the challenge will share their car-free experiences using Twitter and other social media channels.  Individuals who are interested in learning more and participating in this year's Low-Car Diet in the United States or Canada, should visit http://zipcar.com/lowcardiet to fill out an entry form.