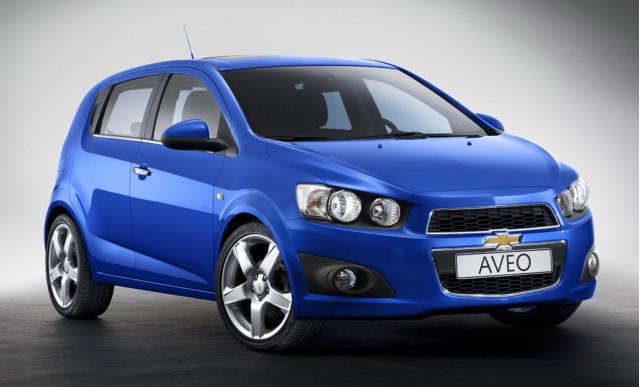 With the 2012 Chevrolet Aveo, General Motors is taking its small car destiny in its own hands, bringing its Honda Fit fighter home to North America--at least in terms of design and production. Unlike the first-generation model, which was designed largely in South Korea, the new Aveo is mostly homegrown and will be making its world debut later this month at the 2010 Paris Auto Show.

While the stylish five-door hatch loses some of the aggression of last year’s striking Aveo RS, most of the concept’s lines have been faithfully transferred to the production version.

To reflect the sporty look of its exterior, Aveo engineers have tuned the chassis for comfort but with responsiveness. Electronic power steering (EPS), Electronic stability control (ESC) and ABS brakes will be standard.

The new Aveo is longer and wider than the current model, giving it a spacious interior and cargo volume that should be among best in class. The interior gets Chevrolet’s new family styling, which sees it share much of its design with cars like the Cruze and Equinox. Blue backlighting is featured on the center console, while the whole of the front cabin is enveloped in a wraparound fascia. This can be color-coded and flows from the dash into both the driver's and front passenger’s doors. Premium features will include available USB, auxiliary-in and Bluetooth functionality.

U.S. delivered Aveos are expected to feature 1.4 and 1.6-liter four-cylinder gasoline engines, with power output ranging from about 100 to 115 horsepower. A new six-speed automatic transmission is also expected to be featured, a first for GM’s small car.

The new 2012 Chevrolet Aveo will arrive in local showrooms next year, with specifications to be released closer to launch. A new sedan variant will also join the lineup, giving the Aveo a better chance competing against the likes of the Ford Fiesta and the hatchback-only Honda Fit.