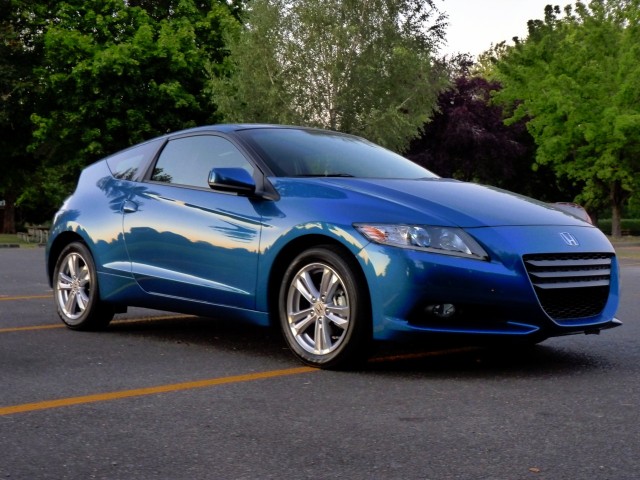 Take a look at the rumblings from critics and pundits, and it's apparent that Honda has been burned a bit by expectations with its new CR-Z coupe. Old-school CRX fans don't think the CR-Z is sporty enough and say it's missing the old CRX's light, nimble, autocross-ready feel, while green geeks judge the EPA fuel economy numbers—as low as 31 mpg, 37 highway—unacceptable.

Throughout a week with the new CR-Z, I found myself more happy with the obvious compromises than upset about them. The CR-Z crosses a performance look—if not the performance itself—with a sort of “comfortable frugality.” Admittedly, forewarned by colleagues, I didn't expect the CR-Z to be a pavement-scorching machine, rather not much different than the Insight.

The trump card that makes the CR-Z feel a bit sportier even though it's not much different than the Insight: the six-speed manual gearbox. While a CVT is also available—and it brings better fuel economy—the shifter's neat, precise linkage and light clutch remind us of what we loved about simpler, sporty Hondas.

The CR-Z's other strength is that it looks great—especially from the back. It's a profile that most will instantly recognize as a Honda, and though the nose seems bigger and longer than it should be (perhaps the product of safety regulations), the rakish look works especially well from the back. In a week with the CR-Z, we found plenty of nods and thumbs-up, and people seemed to really like the look. On the inside, the CR-Z's instrument panel is quite a bit like that of the Insight, but that's not a bad thing.

A two-seater, with plenty of space for stuff

It's an interesting package. Even from a few paces back, the CR-Z looks like it's a four-passenger vehicle, with a small backseat, but that's not the case—at least in the U.S. market. What we get instead is a makeshift cargo tray that doesn't make the best use of the space but is good enough for a couple of small backpacks. Honda could make much better use of this with a cargo organizer or something more compartmented. Behind that (and over a small divider wall) is a modest cargo compartment; because of where the batteries are (just below), the cargo floor isn't as low as you might expect, but it's flat—and the two cargo spaces, combined, hold a lot of stuff. Turn around, and the CR-Z has a handy lower window to allow a clearer view behind—much like the old CRX, as well as the old and new Insight.

We didn't find the CR-Z's seats to be very comfortable; they looked like they might be more supportive for enthusiastic driving, but they felt flat and lacked lateral support as well as lower back support, though we liked the meshy, breathable fabric. There's lots of legroom and enough headroom; visibility is decent, too, though as you'd expect sightlines are a little obscured when looking to the side for lane changes.

The CR-Z has been panned as well for its handling, and perhaps rightly so. Its racy looks promise a little something more, and while it feels sprightly, and somewhat sporty, there are plenty of reminders that the CR-Z isn't the kind of car you'd want to take autocrossing. It feels confident, but its center of mass feels higher than you'd expect (perhaps due to the batteries), with more roll and reluctance to shift its weight around than other small front-drive coupes. Go into a corner -really- hard, and the CR-Z's front end turns mushy, succumbing to understeer. And dump the clutch in first a little too aggressively and get a chirp from one of the front wheels, and the CR-Z's over-active stability control system will cut the power almost completely for an agonizingly long second or so.

The CR-Z's powertrain is much the same as in the Honda Insight (and close to that of the Honda Civic Hybrid). A 1.5-liter i-VTEC four-cylinder engine is supported by Honda's Integrated Motor Assist (IMA) mild-hybrid system, together making 122 hp and, Honda says, producing a torque curve equivalent to a non-hybrid, 2.0-liter four.

At the far left of the instrument panel are three buttons: Sport, Normal, and Economy. Each of these modes alters the way the electric power steering feels, along with throttle response. And the difference between any of the modes is something you can feel almost right away—especially going from Normal to Sport, where the steering gets a firmer feel and throttle response is very aggressive, with the IMA programmed to churn out a quick burst of torque at tip-in. Taking off from a standing start also feels quite a bit different in Sport because of the touchy throttle.

The CR-Z's character completely changes in Sport mode. The firmer yet quicker steering calibration makes the CR-Z feel not only more nimble at low speeds but more settled, with better straight-ahead tracking, at highway speeds. Switch back to Normal or Econ, and the lighter steering feel can be an annoyance on the highway, even with mild tramlines or choppy surfaces, as we kept overadjusting back and forth. If this editor could have his way, he'd combine the less aggressive Econ or Normal throttle settings with the firmer steering feel of Sport mode.

With the manual gearbox, the CR-Z is a little fussy about when the engine will shut off; once it's warm, and if the battery is in a full enough state of charge (and, likely, if you don't have too many accessories on), and the shifter is in neutral or one of the higher gears, the engine will turn itself off and automatically restart when you snick the shifter into first.

Ride quality in the CR-Z is firm but not punishing. Over a wide range of surfaces, we noticed that the CR-Z has remarkably little road noise, as well as very little wind noise at high speed, though the ride did become a little more pitchy and bouncy at highway speeds—a common issue with some of the shortest-wheelbase vehicles, like the CR-Z.

Among other letdowns include the same obstinate navigation system that's offered in the Civic and Insight. Additionally there was no satellite radio, and sound quality from the system wasn't all that great.

The CR-Z's price is redemptive, in some ways. The test car, an EX Navi model, cost just $23,310, including destination.

A number of reviewers have expressed disappointment with the CR-Z's fuel economy. A lot of these same people also vocally complained about its performance. To them, we wonder what gives? Over about five days and 130 miles of mixed around-town and suburban driving, most of it in Normal or Sport mode, we averaged more than 38 mpg. And that included a couple of full-throttle launches. That still seems pretty impressive—though it's still, for the lighter CR-Z, lower than the 45 mpg overall we saw in a similar few days of driving with the Insight last year.

So why does the manual gearbox return such lower mileage than the CVT? The obvious answer is that the six-speed manual has surprisingly low ratios that keep the engine revving well above its economical range unless you're willing to short-shift a bit.

Practically speaking, it's a small, sporty coupe that gets at least 25 percent better fuel economy than most non-hybrid, gasoline cars you'd compare it to. It's not perfection, but those who want to look sporty but be very frugal will be smiling.