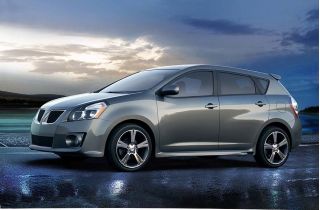 No sooner had Toyota announced it will recall 1.1 million Corolla and Matrix models than General Motors joined in, saying it will recall 200,000 Pontiac Vibe models built at the company's jointly owned plant that use the same engine.

In both cases, the recall will replace an engine-control module that could develop hairline cracks in solder or component attachment points. These cracks can lead to unpredictable behavior, including erratic shifting, an engine that won't start, illumination of the Check-Engine light, or stalling while in motion.

The affected Pontiac Vibe models were made from 2005 to 2008, and are front-wheel-drive only. A press release from GM pointedly notes that the affected vehicles "were designed and engineered by Toyota."

Owners have expressed concerns over stalling in those models for some time now. Starting late last year, the National Highway Traffic Safety Administration (NHTSA) has investigated the Toyota stalling problem.

As with owners of the affected Toyota models, Pontiac Vibe owners will receive a letter next month alerting them to the recall. Then, when parts are available, they'll receive a second letter asking them to bring the car in to receive its new engine-control module.

As GM also notes, "Since GM has wound down the Pontiac brand, owners will be instructed to take their vehicles to other GM dealerships for service." The replacement will be performed free of charge.