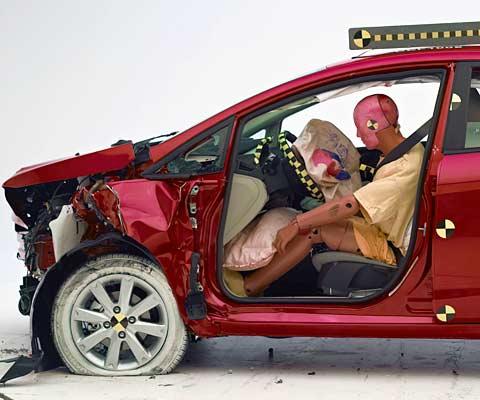 The 2011 Ford Fiesta is the first minicar to earn the Insurance Institute for Highway Safety's (IIHS) Top Safety Pick award since the addition of rollover roof strength testing. Announced today, the rating should help alleviate safety concerns, warranted or not, Americans may have with small cars.

The 2011 Fiesta scored "good," the top rating from the IIHS, in front, side, rollover and rear crash protection while featuring electronic stability control standard on all models. That beats out all other minicars, putting the Fiesta at the front of the pack.

Some would argue the Fiesta is already at the front of the pack on styling and interior quality as well, a solid notch above the shared-architecture of the Mazda2. And as John Voelcker noted in his first drive review back in April 2009, the Fiesta is a fun and sporty little city cruiser, too.

Such a complete package of sport, safety, and style isn't cheap, however. Though it starts at a mere $13,995, a more typical configuration with popular equipment will run closer to $17,000. Fully loaded, the 2011 Fiesta can reach above $23,000--well into midsize sedan territory.

Check out our overview page for the full details on the 2011 Ford Fiesta.