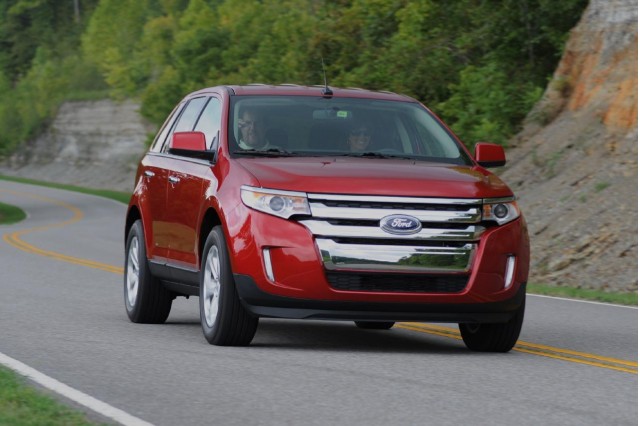 As we previewed last Friday with a Madlibs-inspired snippet of edited road test, our driving impressions of the 2011 Ford Edge can now be released.

The 2011 Ford Edge five-seat crossover was launched in 2007 and has now sold more than 400,000 units. This is its first major update, and it is not only restyled but offers a new interior, many electronic and driver-control enhancements, and a completely new interior.

The 2011 Ford Edge is considerably sleeker from the front and front-three-quarter view than its predecessor. When that first 2007 Edge was launched, Ford was spreading its corporate grille--with three chrome bars--across all its passenger vehicles.

The 2011 update pulls off the difficult trick of making the front end look lower and more streamlined by making the grille deeper but sweeping back the front light units, which are smaller.

Ford engineers also improved the Edge's aerodynamics, dropping the drag coefficient from 0.385 to 0.363. Their many tricks included cutting the size of the openings where air enters the engine compartment by 40 percent, but directing the underhood airflow better.

Somehow it all works. We can say conclusively that while we were lukewarm on the overall profile of the first Edge, we like this one.

Inside, the dashboard, instrument cluster, center stack, and console have all been redesigned. The plastics are nicer, most of them using soft-touch materials, and their shapes are less blocky.

The Edge Sport model has blacked-out grille inserts, a body kit, and other subtle visual cues, along with grey inserts and contrasting stitching on the seats--like the Mustang, as Ford points out.

Stepping smartly away from stop

We drove several 2011 Ford Edge models through the rolling country around Nashville, but not the one we were waiting for: the Edge with EcoBoost, powered by a direct-injected, turbocharged 2.0-liter four that puts out as much power as a V-6 with gas mileage at least 10 percent better.

That Edge will be shown at the end of the year, after the engine debuts in the 2011 Ford Explorer, and will go on sale early next year.

Instead, we mostly drove the standard 285-horsepower 3.5-liter V-6, which puts out 20 more horses than it did last year. This engine is mated to Ford's six-speed automatic, giving 19 mpg city, 27 mpg highway, though those numbers fall to 18 and 26 mpg when all-wheel-drive is specified (it adds roughly 175 pounds).

Specified with the trailer towing package, the 2011 Edge will haul up to 3500 pounds.

One of the features buyers liked most about earlier Edges was the acceleration. Ford has tuned its latest engine and transmission to offer lots of power away from the stoplight. The accelerator pedal tuning, in fact, requires a bit of learning to avoid jerky takeoffs from the abundant power at the top of the pedal travel.

Beyond that, though, the acceleration is "linear and seamless," qualities that Ford's Scott Slimak said are now a core element of the "Ford DNA" characteristics built into every new vehicle.

Beyond the 3.5-liter, the other engine option comes only in the low-volume 2011 Edge Sport, fitted with a 305-horsepower 3.7-liter V-6--40 more horsepower than last year's--mated to the six-speed automatic, but with paddle shifters added for sportier gear changes.

It also sports gigantic 22-inch wheels and low-profile tires. Behind the wheel, the Edge Sport handles nicely, and although its roll center is actually a touch higher due to the huge wheels, we found that it cornered flatter than the base model.

While it had a bit more road noise and a more active ride, we were surprised that it wasn't rougher still. Overall, the Edge Sport made us wish for the suspension modifications and paddle shifters applied to the base vehicle without the visual cues.

The Sport's fuel economy falls slightly, to 18 mpg city, 25 mpg highway (or 17 and 23 mpg with all-wheel-drive). Ford views it as the model for a Mustang owner who has just found himself with kids, and wants to stay in touch with good handling and a sporty feel.

The front seats are nicely upholstered and comfortable, although we were baffled by Ford's inconsistent power seat controls: fully powered for the driver, but a power lower cushion with a manual recline lever for the front passenger.

Ford claims that the 2011 Edge has best-in-class legroom in the second row, and we're not inclined to doubt them. The rear seats now recline, and we fit four 6-foot adults into the Edge without complaint.

Build quality was very good considering that we were driving pre-production vehicles. We heard no interior creaks or other noises, and the noise suppression is good on the base car. The Edge Sport, as noted, produces more tire noise, an inevitable price to pay for its huge, very low-profile tires.

The 2011 Edge now has bottle holders in all four doors, as well as the usual (and growing) array of pockets, bins, trays, and other areas to put stuff. It also has a Volvo-esque recess and tray behind the console, about which Ford said nothing at all--perhaps in deference to the recent sale of Volvo to the Chinese firm Geely.

One of the areas Ford focused on for the 2011 Edge was improving the brakes, both in feel and performance. The rear rotors are larger this year, and the braking progression has been retuned for more initial bite and shorter overall stopping distances.

Other brake-related features added for 2011 include hill-start assist, which prevents the vehicle from rolling backward at stops; trailer sway control adapted from Ford's F-150 pickup line; and adaptive cruise control and collision warning, which use front-facing radar to calculate the distance to the car ahead.

There's also Ford's Blindspot Information System, which flashes a light when a car in in the adjacent lane out of sight of the mirros, along with cross-traffic alert, which can detect traffic approaching from the side when backing the car out of a parking space. 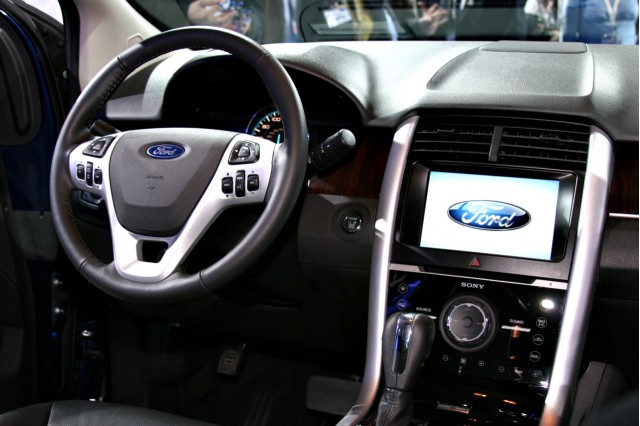 MyFordTouch and much, much more

On all but base SE models, the central speedometer is flanked by twin displays that can be toggled to bring up a host of information--or very little--depending on the driver's preference.

Only Ford offers this virtual dashboard on so many models, and we think it's possibly the best dashboard offered on mass-market vehicles today. The associated MyFordTouch system will be fitted, Ford estimates, to 80 percent or more of 2011 Edge models.

It lets drivers operate not only the telephone, entertainment, and navigation systems using voice commands--Sync did that three years ago--but also the climate control. Which, if you think about it, make up the four areas with controls that make drivers take their hands off the wheel.

While the multiple options for making something happen in the car take explaining, we found MyFordTouch easy to use, especially once we stopped stabbing at the central touch screen and began using the thumb controllers on each face of the steering wheel to supplement our voice commands.

The array of voice commands and syntax has expanded from 100 Sync options to more than 10,000 today, and Ford has flattened the command structure somewhat. This means that drivers can tell the system to "play Elvis Costello" rather than having to specify "entertainment" or digital music first--though, oddly, it's still necessary to say "climate" to change temperature settings.

There are many more features to MyFordTouch than we could cover here. One is standard turn-by-turn navigation instructions (even without a nav system fitted) plus the ability to send routing instructions from Mapquest or Google Maps to the car through a paired device.

Beyond the mid-range SEL model which includes the electronics, Ford offers an Edge Limited package that's the most luxurious model you can order.

The Sony sound system, the high-end stereo option, is fitted behind a high-gloss black panel on the center stack that brings the Sony look even into some vehicle controls.

The climate controls and even the emergency flasher button are all touch-sensitive, a bit too much so in the case of the flashers, which the passenger turned on more than once reaching across to adjust something or other.

The Edge Sport includes most of the amenities from the Limited model with a few of its own, including the contrasting color seat inserts, a bodykit and blacked-out grille, those 22-inch wheels and tires, and of course the 3.7-liter engine and paddle shifts for the transmission.