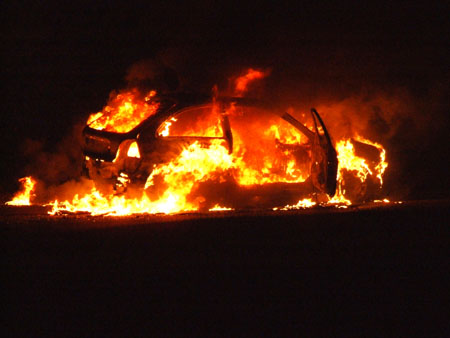 Smashed windshields, staged accidents, and suspicious fender-benders and vehicle fires might remain relatively common tactics for deceiving insurance companies—and might be more rampant in a down economy—but insurers are definitely catching on.

Last week, the National Insurance Crime Bureau (NICB) released a questionable claims analysis for the first half of 2010 and found that overall, referrals of claims to law enforcement were up 18 percent from 2009 to 2010; and from 2008 to 2009 they'd already risen by 31 percent.

The only types of law enforcement referrals that were down in 2010 so far have been agent and adjuster fraud, as well as informant tips.

Criminals are clearly seeking creative ways to pad their coffers, at the expense of those who pay their premiums and use insurance only for honest accidents. Some crime rings involve deliberately damaging vehicle windshields and file a damage claim, then don't fully fix the windshield. Inflating towing or storage bills is another tactic.

Instances of inflated towing or storage bills went up a remarkable 92 percent. Questionable auto repair or auto-body claims were up 29 percent, and VIN manipulation was found up 22 percent.

So if faking a receipt for towing, or setting that vehicle you regret buying ablaze sounds like a good idea…um…it's not.