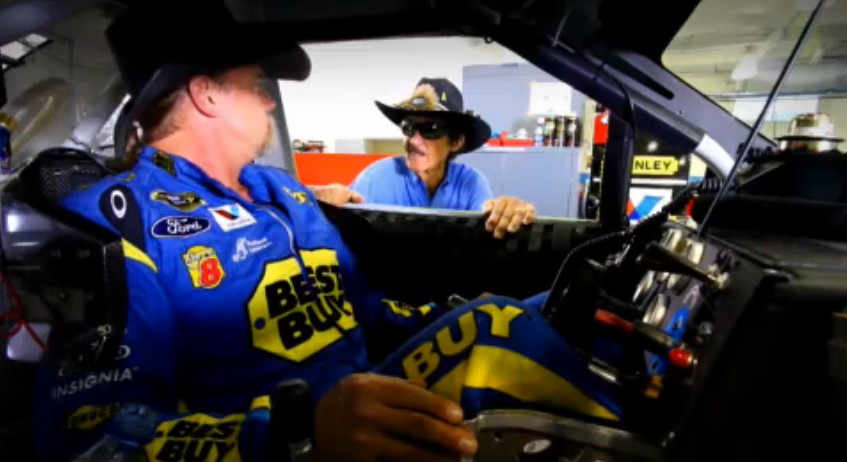 Trace Adkins, Richard Petty in a commercial for BC and Goody's Powder

Trace Adkins, Richard Petty in a commercial for BC and Goody's Powder

If you grew up in the South, you probably had an uncle or a cousin or a grandmother who swore by BC Powder. When you slept over on Christmas Eve, you'd rifle through their medicine cabinet looking for toothpaste (you left yours at home), and you'd see the tell-tale blue and white box and laugh.

You'd explained it to Aunt Dorothea nine ways to Sunday: B.C. is just ground up aspirin, mixed with a little caffeine and shoved in a piece of tissue paper. But she wouldn't listen. "Sugar," she'd whisper, her breath still smelling of coffee and a few stealthy puffs of Virginia Slims, "a world without B.C. is a world I don't want to live in."

All these years later, they still make BC. And by "they", we mean GlaxoSmithKline. "They" also make Goody's Powder, which is essentially the same stuff, but with a different colored box. And now, GSK has decided to run an ad campaign that puts the two pain relievers head-to-head.

Of course, because BC and Goody's are used almost exclusively in the South, GSK's marketers have tapped into two things (they assume) every Southerner knows about: country music and NASCAR.

Fans of Trace Adkins, Richard Petty, and stock car racing will probably find this commercial at least as funny as your average Hee Haw skit. Everyone else, skip on down to the press release, which is nearly as hilarious as Minnie Pearl.

The Pick A Powder Campaign Launches Its Funniest Video Yet – 6-foot-6 Trace Adkins Trying to Get Into Richard Petty’s No. 43 Stock Car

Memphis, TN/Concord, NC (Aug. 9, 2010) – Country music superstar Trace Adkins, and racing legend and NASCAR Hall of Famer Richard Petty are at it again. The humorous rivalry videos where they are shown in each other’s world are now appearing online as part of the Pick A Powder Program. The one launching this week shows 6-foot-6 Trace attempting to get into Richard Petty’s No. 43 stock car. Since the campaign started, they have been going back and forth with each other on Facebook and in videos, all in an effort to get the most fans on their team and to show they experience more pain than the other.

BC Powder and Goody’s Headache Powders, the brands Adkins and Petty represent, are going head-to-head in an online contest. The BC and Goody’s “Pick A Powder” campaign plays off the fierce and generational loyalty users have to either Goody’s or BC. Both Adkins and Petty will try to get their fans around the country to pick their team to support: Team Richard for Goody’s and Team Trace for BC on www.pickapowder.com. The man who gets the most fans to join his team will get to see the other “perform” LIVE at the Goody’s 500 in Martinsville, Va. next spring. The campaign will feature a charity component with a donation being made to the Wounded Warrior Project on behalf of Adkins and BC, and Victory Junction Camp for seriously ill children on behalf of Petty and Goody’s.

Through the series of spoofs, jabs, challenges and contests, Adkins and Petty will continue to take on new experiences in each other’s profession throughout the year. The funny moments have been captured on film and are regularly posted on www.pickapowder.com. Fans of either or both men will be brought into the fold to help decide which brand is the favorite among powders users and which one of the two men truly suffers from the toughest pain.

Since June 30th, nearly 30,000 votes have been cast on www.pickapowder.com where fans can vote daily for Team Richard or Team Trace. They are also voting for a chance to win an all expense paid VIP trip for four to The Goody’s 500 at Martinsville Speedway (race tickets, air and hotel) for the Team Richard winner, and an all-expense paid VIP trip for four to a Trace Adkins concert stop (concert tickets, air and hotel) in early 2011 (location TBD) for the Team Trace winner. Winners will be announced in Early October.