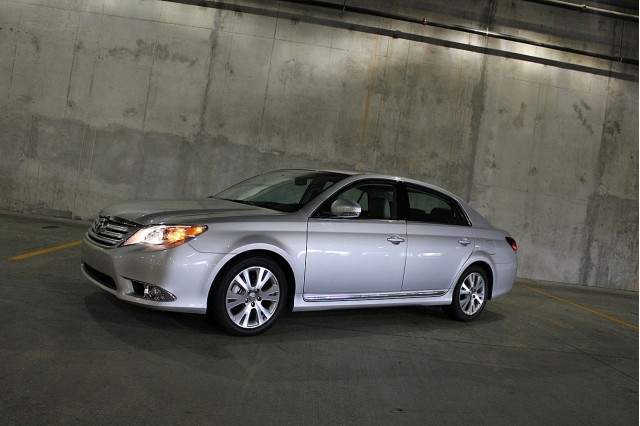 The 2011 Toyota Avalon isn't a big mystery, but we'll forgive you if you didn't know a new Avalon was even in the works. It's been buried.

With Toyota's recall troubles earlier in the year, it's been forced to play defense. That's put the launch of some of its vehicles into simmer mode, and that's where we found the Avalon--on the back burner. After its 2010 Chicago show introduction, Toyota quietly put Avalons in its showrooms in May and started doling out test cars after that. No splashy press drive, no deep-dive backgrounder, nada. Before we knew it, we could stage our own first drive of the 2011 Avalon, which we did over the bubbling blacktop here in 95-degrees-and-counting Atlanta.

The slow burn suits the Avalon just fine--it's not radically changed in any way--but it underserves a car that's exactly the kind of vehicle Toyota does really well. The Avalon doesn't fit the sweet spot carved out by buff books and enthusiast drivers. It simply provides the kind of carefree, low-fuss, no-brainer driving experience that plainly works for a wide swath of drivers, especially older drivers.

Designed in California and built in Kentucky alongside the top-selling Camry, the Avalon's essentially a stretched Camry with more interior space and a streamlined ordering sheet, with some nicely conceived details woven into its off-the-rack suit of sheetmetal. We've mentioned in prior reviews how the Avalon's exterior tames any notion of excitement, and that's true again for 2011. Still the new Avalon carries some swell details inside and out, and you can thank Target for providing an empty gray parking deck to show off those subtle creases and welts. The formal grille? It's grown wider and more assertive, just like the gentle underbrow of its headlamps. From straight on, some of the cutlines and moldings in the front bumper clone the same bits on the latest Benz E-Class, even. Down its sides, the Avalon's crisper stampings give it a broader shoulder line than before. And in back, the generic Toyota taillamps light up with C-shaped LED coolness.

Inside there's an elegant dual-cowl dash, with the second cowl arching over the radio and climate controls. Woodgrain trim dominates, along with big knobs and a big LCD screen that controls the Avalon's available navigation system. The gentle swells formed into the dash are some of the more effortless Toyota efforts, and save for the bugle-bead radio buttons and the matte artificiality of the woodgrain trim, the cabin strikes us as styled and trimmed above its slightly downscale mission.

A performer? Well, yes, the 2011 Avalon can perform. We wouldn't be surprised if Toyota quoted a 0-60 mph time of about 8 seconds; the 3.5-liter V-6 puts out 268 horsepower with a little more pronounced sound than an Avalon ever has, and feeds it out to the front wheels through a six-speed automatic transmission. It's a familiar recipe, found across the Toyota lineup from the Venza crossover to the Sienna minivan and in the Camrys as well. Here, the transmission's a little more jerky than we've felt in previous iterations--and we'd guarantee, from the stiffness of the lever moving into the slot, that we were the first ever to put the automatic into its manual-shift mode. We'd call it Sport mode, but it's not. It doesn't induce any noticeable fever in the powertrain, and just awards the handful of interested drivers with another way to tap that ample power. With this sole drivetrain, the big Avalon is rated at 20/29 mpg, which Toyota says is best in a class that includes cars like the Buick LaCrosse and the Hyundai Azera.

Handling dulls the engine's straight-line performance a bit, but the Avalon's the rare Toyota with decent on-center steering feel. It's light from that point to any point on the arc, but that's precisely what attentive but unengaged drivers need. A simple strut suspension  avoids some of the harshness that low-travel control arms can introduce, and the four-door's ride is beyond creamy--though the softness also allows the front end to bob up and down more so than any family sedan we've driven this year.

To fully understand the Avalon, you'll have to slip from the roomy but flat front buckets (which also vibrate at speed, in uncharacteristic fashion) into the back seat. Here the Avalon does is at its most convincing. The near-luxury accommodations have so much leg and head room, even with the power driver seat dialed back, we can't even think of a friend who wouldn't be cozy. The rear seats tilt back for long-distance comfort, and there's a keyhole of access to the ginormous trunk that makes a ski weekend for four a snap. A six-seat version can be ordered, for the one or two fans of column-mounted shifters out there; leather upholstery is standard, and with the generally handsome level of materials, the Avalon's cabin is up to its $30,000-plus task.

Toyota's trimmed the Avalon into two models, with relatively few options. The base car has Bluetooth; steering-wheel controls for phone, climate control and audio; XM radio; USB connectivity; and the usual array of airbags, including a driver knee airbag. The Limited adds a smart-key system, ventilated front seats, and a power front passenger seat.

All versions get a rearview camera; the base car's display is in the rearview mirror, and it washes out easily--though opposed to the navigation-system rearview display on more expensive models, at least it's in the right location. The USB port's in the center console, so hiding your media player is a snap. And the Avalon has storage galore: the glovebox is large, the doors have flip-out bins (but no molded-in bottle holders), and the console has two large storage bins behind and under lids for protective custody, though the vertical woodgrain door on our test car needed adjustment.

Our Avalon wore a pricetag of $32,245 base, with an additional $750 destination charge. Including $199 floor and trunk mats, and a $900 JBL audio system with CD changer and Bluetooth streaming, the final tab rose to $34,094--and that's before a navigation system or Limited trim. At this leaner end of its pricing spectrum, the Avalon represents a big six-passenger deal--particularly if you're not devoted to the S-curves that life throws at all of us at one point or another.