Connect with our dealer and finance partners through our site and ask for details regarding their at-home car buying services.
OK
HomeNewsVideos

Battle Of The Brands: Which American Automakers Bare All On YouTube? 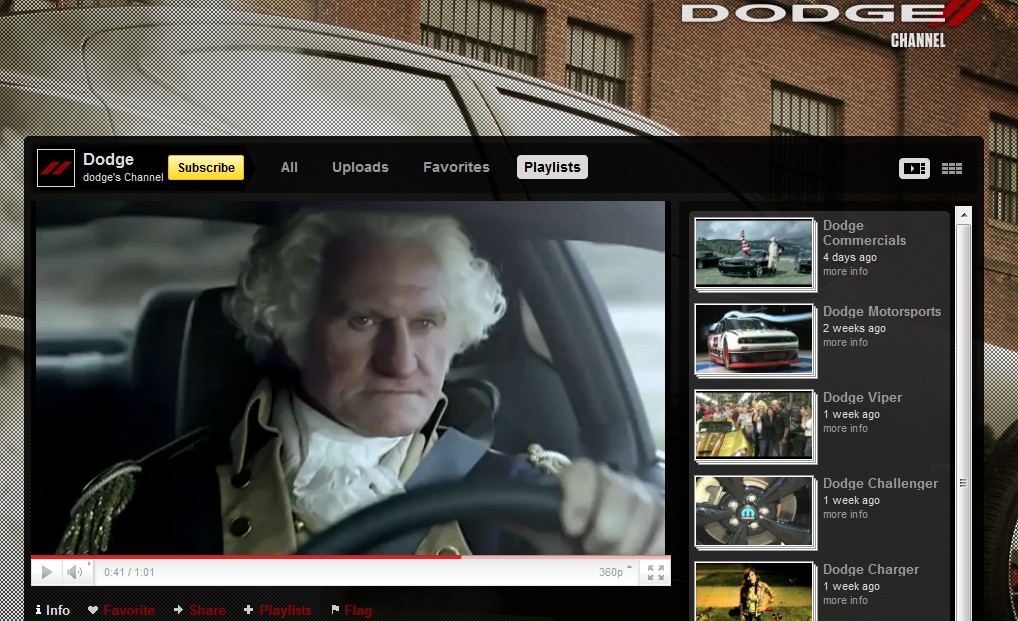 This week at SocialCarNews, we're hosting a little competition.

You see, we spend a lot of time debating which automakers do well on the social media front and which, well, don't. But most of those discussions center on specific marketing campaigns, like Suzuki's AllPoints contest, or the brou-ha-ha surrounding Volkswagen's recent "Shoot the Gap" ad. So, we all got together, and after the third pitcher of margaritas, we decided that we needed take a much broader view. As a result, we're going to spend this week looking at automakers' YouTube channels to see which measure up and which fall flat.

Today, we're covering U.S. brands, with European, Asian, and exotic marques following over the next few days. (As long as they sell cars in the U.S., we'll try to include them.) On Friday, the trumpets will flare and the fireworks will go off as we announce our best-in-show winners. So, put on those headphones and follow along -- and don't be afraid to put your two cents in the comments or an email.

Total uploads: 49 videos (though a considerable number are duplicates)
Total subscribers: 268
Total views: 211,846
Date launched: January 23, 2008
Date range of clips: Roughly one week to ten months
Like: Straightforward and simple (though given Buick's limited lineup, that's to be expected)
Dislike: Navigating by playlists can be kind of a pain. Is it too much to ask to see everything at once?
Most recent clip: "Buick Regal: 'Discover Beauty'"

Cadillac: //www.youtube.com/user/cadillac
Total uploads: 66 (approximately)
Total subscribers: 991
Total views: 1,498,280
Date launched: November 28, 2005
Date range of clips: Roughly one day to one year
Like: It's pretty, we'll give 'em that much
Dislike: Like Caddy's sister, Buick, it's impossible to see every clip on the channel at once. What are they trying to hide?
Most recent clip: No idea

Chevrolet: //www.youtube.com/user/chevrolet
Total uploads: 296
Total subscribers: 1879
Total views: 1,650,896
Date launched: January 11, 2006
Date range of clips: Two days to seven months
Like: Easy to use; straightforward; neat and tidy, even though the channel is over four years old
Dislike: Not much. Buick and Cadillac should take lessons
Most recent clip: "Chevrolet takes a spin at the MLB All-Star Game"

Chrysler: //www.youtube.com/user/chrysler
Total uploads: 37
Total subscribers: 297
Total views: 26,977
Date launched: October 2, 2005
Date range of clips: One month to six months
Like: Meh, it's fine
Dislike: That header proclaiming "brand channel" (it should be obvious); the fact that someone's disable the "all" button, preventing us from seeing everything at once
Most recent clip: Chrysler 300 Boxer TV spot

Ford: //www.youtube.com/user/ford
Total uploads: 177
Total subscribers: 2,496
Total views: 997,902
Date launched: November 1, 2005
Date range of clips: One week to one year
Like: Clean design; fairly well-curated selection of clips
Dislike: "Clean" is awfully close to "dull"; no "all" button at the top, so we can't see everything at a glance (why do folks keep doing this?)
Most recent clip: "Operation Drive One"

GMC: //www.youtube.com/user/thejeepchannel
Total uploads: 17
Total subscribers: 206
Total views: 74,364
Date launched: December 23, 2005
Date range of clips: Three weeks to seven months
Like: Well, it's pretty
Dislike: Not a lot to see here -- especially given that the channel is nearly five years old; feels fairly underused; also, it's nearly impossible to find from within YouTube (we reached it via the GMC homepage)
Most recent clip: "2011 Sierra HD"

Jeep: //www.youtube.com/user/thejeepchannel
Total uploads: 228
Total subscribers: 2,990
Total views: 3,575,684
Date launched: January 19, 2006
Date range of clips: Five days to four years
Like: Huge number of videos; clean design; "all" button enabled at the top
Dislike: There are so many clips that sorting through them can be daunting. Vetting a few wouldn't be a bad idea -- especially clips like "Bouncy and Fun", which are totally 100% fine for fan uploads, but maybe not so appropriate to host on an automaker's channel
Most recent clip: "The Things We Make Make Us"

Lincoln: none that we can find (though we really hope it isn't this one)

Tesla: //www.youtube.com/user/teslamotorsvideo
Total uploads: 25
Total subscribers: 712
Total views: 1,214,944
Date launched: April 7, 2008
Date range of clips: Three weeks to two years
Like: Clean and simple; lots of good videos explaining the Tesla Roadster (important for such a new ride)
Dislike: Really, the best they could do is flat, YouTube 101 white? The Roadster is an amazing ride -- could we at least get a growling header image?
Most recent clip: "Secret Tesla In-Store Acceleration Testing"