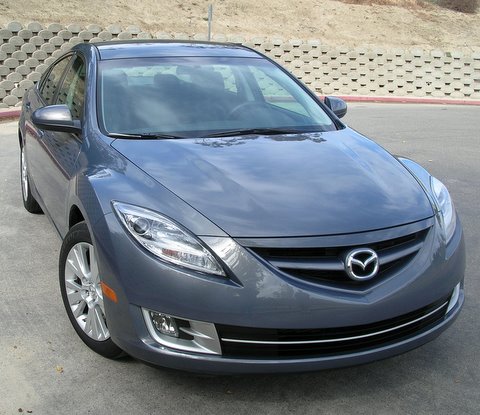 Mazda has released the first official information about the 2011 Mazda6 sedan, and in addition to improved fuel economy the model gets a new look, including new materials inside and new details inside and out.

While engine power hasn't changed for 2011—offerings remain either the 170-horsepower, 2.5-liter four-cylinder engine or the 272-hp V-6—fuel economy has improved dramatically, likely the result of taller gearing across the lineup.

The Mazda6 gains at least 1 mpg across the entire line. Four-cylinder 'i' models now get 21 mpg city, 30 highway (up from 20/29), and 'i' models with the five-speed automatic get 22/31 (21/30 last year). Mazda cautions that the new EPA figures with the four-cylinder and automatic transmission haven't yet been EPA-confirmed.

With either of the engines, The Car Connection loves the way the Mazda6 drives and handles, and since its redesign for 2009 it's offered enough space for two adults in back, three in a pinch. The 2010 Mazda6 achieves one of TCC's highest Overall Ratings among mid-size sedans, with an 8.6 altogether, as we note its classy styling, strong V-6, excellent handling, and good cargo space as reasons for liking it. The only gripes were that the instruments are a little hard to read, and Bluetooth isn't offered on more of the trims.

Though Mazda hasn't yet released pictures of the new Mazda6, the 2011 model will have new headlight and fog light designs, newly available silver and pearl white paint hues and, on Touring Plus and Grand Touring trims, folding side mirrors with integral turn-signal lamps. Inside, the standard cloth upholstery is new, as are stitched vinyl armrests and a new steering-wheel design, and the instrument panel gets more bright trim, likely to match that which was introduced this past year on the 2010 Mazda CX-7.

For 2011, the Mazda6 is offered in four models: Sport, Touring, Touring Plus, and Grand Touring, with the base SV model dropped. In addition, the Bluetooth hands-free interface has now been included with the mid-range Touring model (addressing one of our complaints), and Mazda6 Grand Touring models get a 4.3-inch multi-information display with rearview camera system. A rearview camera and larger seven-inch touch screen now come with the nav system.