Survey: Teens Admit To Distracted Driving And Know It's Risky 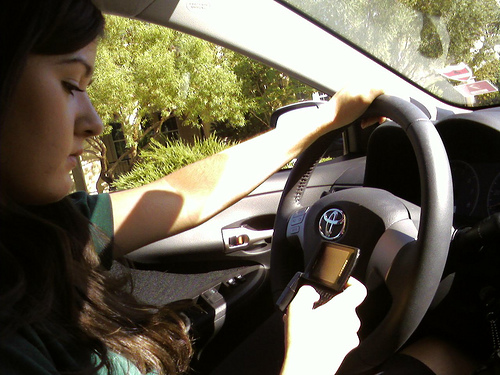 Teens know that talking, texting, and eating while driving are among many dangerous distractions. Despite that, the majority of teens do them, at least occasionally, anyway.

According to a new survey conducted by Seventeen magazine and AAA, nearly nine of ten drivers (86 percent) have driven while distracted. Nearly as many, 84 percent, knew the behavior was dangerous.

There's a certain double standard, because while teens think they're smart enough to avoid an accident in the driver's seat, as passengers, they're clearly worried about driver distraction. More than a third think that they've been involved in a close call or near-crash because of a driver's distraction, and 38 percent have been afraid of harm as the passenger of a distracted driver.

Worried about other drivers, but not so much themselves

Yet as drivers, they admit to plenty of distraction. Among those polled, 60 percent admitted to talking on a cellphone while driving; 61 percent have eaten while driving; and 73 percent have adjusted the sound system (although we're probably all a bit guilty of that one).

An even more frightening tidbit is that teens who do text while driving admit to sending an average of 23 texts while behind the wheel per month.

Excuses are varied as for why these cognitive and physical distractions apply to others but not to their driving safety. Forty-one percent dismiss their action as only taking a split second, while a third don't think they'll get hurt and another third simply say they're used to multi-tasking.

Texting-related distraction is rapidly becoming the cause of as many accidents as recklessness and inexperience (well, you could argue that texting is recklessness…). In another survey, conducted for the insurer Allstate, teenage girls admitted to speeding and texting more often than teenage boys.

Also, earlier this spring, we reported on companion site College Car Guide that cellphone-related distraction is the likely cause of a rise in nighttime deaths of teen drivers and passengers—as the fatality rate has fallen for most other age groups.

Not me...I'm careful when I text

Put it all together and there's a certain, "No, it's not me" disconnect happening, especially with teens.

According to the AAA, looking away from the road for just two seconds doubles your risk of a crash. The survey coincides with a "Two-Second Turnoff Day," aimed at raising awareness about the issue of texting and driving.

In 2008 alone, according to the National Highway Traffic Safety Administration (NHTSA), nearly 6,000 occupants died due to distracted driving and more than 500,000 people were injured.