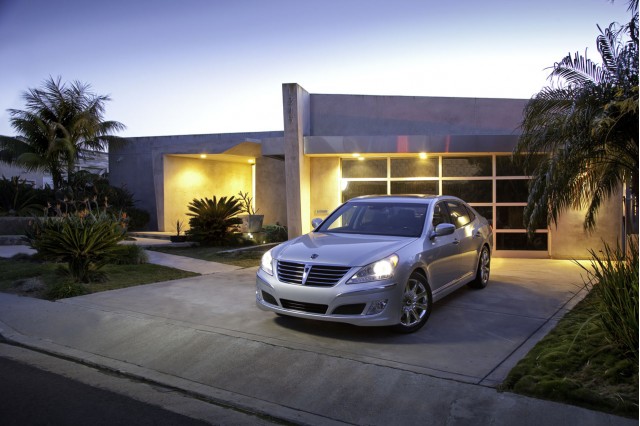 If you're a car company that Hyundai has in its sights, it's a safe bet you're rather alarmed.

Hyundai's on a roll. The Korean automaker has marched into new segments, and stolen share from the likes of Chrysler, Nissan and GM with vehicles like the Santa Fe crossover, the Tucson compact ute, and this year alone, with the swell 2011 Sonata, it's outpacing even the best-case projections.

Hyundai's also aiming at luxury brands, first with the handsome, credible Genesis sedan--and now with the Equus, an entirely different beast that brings ultra-luxury amenities down to the semi-well-heeled masses at a base price in the $55,000 range.

We've driven the Equus a couple of times--last summer in the suitably fig-leafed Not a First Drive, and earlier this summer, in a quick trip over to Hyundai HQ in Seoul. Hyundai provided a lovely airplane to get us there, and had U.S.-spec models of the Equus on hand for us to drive--with the caveat that more tuning would take place before the big sedan goes on sale later in the year.

From our first impressions both times in the Equus, it's fair to say it should attract some buyers interested in the softer side of things. The Lexus LS 460 in particular is in the Equus' crosshairs, since the cars are similar in size, in power output and much more so, in interior styling. Outside, the Equus reminds us more of a blend of the current E-Class Mercedes and the last-generation Lexus LS--not bad stretch goals to hit, squarely.

Driving impressions are difficult to gauge on international roads, with limited exposure. Still, we're sure the Equus will be one of the coziest rides in the class, far removed from the handling high-water mark found in the 2011 Infiniti M56. The Equus steers lightly, accelerates briskly and almost silently, but soft suspension settings and tire choices mean the handling trade-offs come earlier than even in the Lexus LS. Lexus also offers a Sport edition with paddle shifters and some more bite and feedback in its major controls; a Sport edition doesn't seem to lie in the Equus' future.

What will come to it, and soon, is an upgraded powertrain. At launch, the Equus will feature the 4.6-liter, 385-horsepower V-8 engine that's also installed in the Genesis. Sometime next year, both cars will receive a 5.0-liter version of the same engine, with 429 horsepower. It's possible Hyundai still will offer the smaller-displacement engine--or will add a long-wheelbase Equus to further distinguish it from the Genesis--but we can't confirm either is in the works.

The Equus' most important pitch may be in customer service. Hyundai dealers will come to owners to service the car, fetching it rather than having them drop it off. They'll also deliver the new Equus with an Apple iPad that contains the owner's manual, and an application to set up service appointments. It's a plan that outflanks the coddling you'd receive from any mainstream luxury brand--even Lexus and Infiniti, long known for their handling of owners.

We'll be driving the Equus more on U.S. roads this summer, but until then, click over to our initial impressions of the big new sedan at our 2011 Hyundai Equus page, where you can find photos, videos, related news, and more.