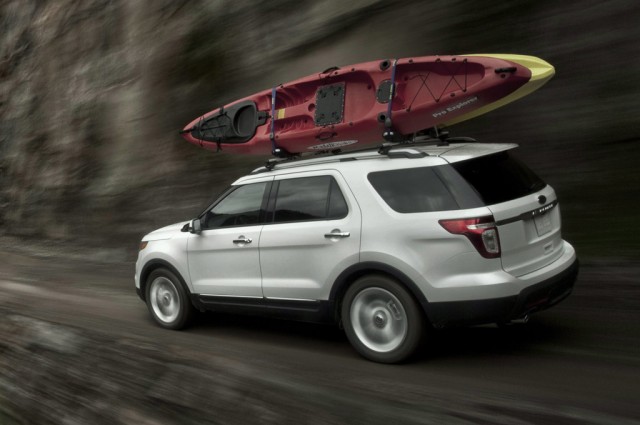 Ford has spent all summer building buzz for the 2011 Explorer, using Facebook, teaser shots, and other means to generate interest. Well, today's the day in which we in the automotive media can finally share the details with the rest of the world.

The Explorer is scheduled to be revealed live in several cities across the country--with the the unveiling in Manhattan being the main focus--and it will also be exposed to the world via Facebook. Here's what we know so far.

Once of the world's strongest-selling SUVs, the Explorer's star faded over the past fifteen or twenty years, starting with the tire-blowout/rollover debacle. Rising concerns about gas prices and fuel economy, along with the industry-wide shift to car-based "crossover" SUVs further dented the Explorer's mojo. Consumers showed a strong preference for crossovers, due to their car-like ride and handling and stronger fuel economy. Further hurting the Explorer was the fact that it continued to be built on an aging platform, while Ford offered the crossover Edge and the boxy, unique, Taurus-based Flex.

For 2011, the Explorer is shifting to a car-based crossover platform, and it, too, will share its platform with the Taurus and Flex. Ford is aware of the Explorer's off-road reputation, and therefore the Explorer will offer 7.9 inches of ground clearance, optional all-wheel drive (badges will say "4WD"), a towing capacity of up to 5,000 lbs on V-6 models (trailer-sway control is available, as is a tow/haul mode for the automatic transmission), and a terrain-management system (standard on all-wheel drive models) that will allow drivers to choose from four different modes for the AWD system, depending on road conditions. A Hill Descent Control system will also be offered.

Power will come from either an optional 2.0-liter EcoBoost turbocharged four-cylinder that makes 237 horsepower and 250 lb-ft of torque, or a standard 290-horsepower 3.5-liter V-6 that makes 255 lb-ft of torque. Both engines are of the dual-overhead cam variety, and Ford promises a fuel-economy gain of 30 percent over the previous generation 4.0-liter V-6 for the new four-cylinder, and a 32-percent boost for the new V-6 over the old model's optional 5.0-liter V-8.

Both engines will be paired with six-speed automatic transmissions, which will be uniquely geared to suit each engine. XLT and Limited models will offer manumatic shifting. The Explorer will also offer 17-, 18-, and 19-inch wheels.

Weight savings and the EcoBoost engines are responsible for the better numbers, but the Environmental Protection Agency (EPA) hasn't done its testing yet, so no hard mpg numbers are available.

The 2011 Explorer will have softer styling that previous models, softer even then the Explorer American Concept shown at the 2008 Detroit Auto Show, and does grow some in size--its about 5 inches wider and 3 inches longer than the outgoing model. Interestingly, the 2011 model is about 1.5 to 2 inches lower. The new Explorer will offer standard seating for up to seven and have a power-folding third seating row that can fold flat.

For families that make safety a priority, the 2011 Ford Explorer will be the world's first vehicle with inflatable safety belts, which will be mounted on the second row outboard seats. This feature acknowledges that both children and older adults are likely to ride back there. The inflatable belts spread restraining force over the entire body, reducing force on any one area of the body, and they also restrict head motion in the event of an impact.

Other family-friendly safety features include a blind-spot monitoring system, cross-traffic alert, and a radar-based adaptive cruise control system that can apply the brakes at speeds above 25 or 30 mph in the event that a crash can't be avoided. Ford's new curve-control system will also be available--that system applies the brakes lights and slows the vehicle by up to 10 mph a second if a driver enters a curve too fast.

The airbags have pressure sensors to allow for faster deployment, and the side-curtain airbags will deploy if the Explorer rolls over, and stay inflated for 6 seconds after the crash.

One other safety-oriented touch: Ford's Sync multimedia-suite can now dial emergency numbers through a Sync-connected phone, and Sync's Post-Crash Alert system will trigger the horn and hazard flashers after a crash until a door is opened or the ignition key is cycled. Sync is not available on base models.

Ford's MyFordTouch system will be offered, and every trim level will come standard with some version of MyFordTouch. This system allows drivers to use voice commands to adjust the radio or air-conditioning controls. Controls are separated into four groups: Phone, Navigation, Climate, and Entertainment, and owners can use a combination of voice commands and touch screens to make the needed adjustments with less distraction, or so claims Ford. The 2011 Explorer also will be available with a "Do Not Disturb" feature, which will send incoming calls on Sync-enabled phones directly to voicemail, and will hold incoming text messages to be read a later time.

The list of available features will also include Ford's parking-assist system, ambient interior light, and an cap-less fuel filler.

The Explorer will start at $28,995 when it goes on sale this winter.

The challenge for the new Explorer is to retain its off-road roots, while still appealing to suburban strip-mall shoppers. It also needs to be unique enough from the Edge and Flex to justify the presence of three mid-size SUVs in the Ford family. Finally, it needs to erase any bad memories from the rollover scandal once and for all.

Based on early reports, it's a start. Check out all of High Gear Media's coverage here.