J.D. Power: It's A Mixed Bag For Auto Sales 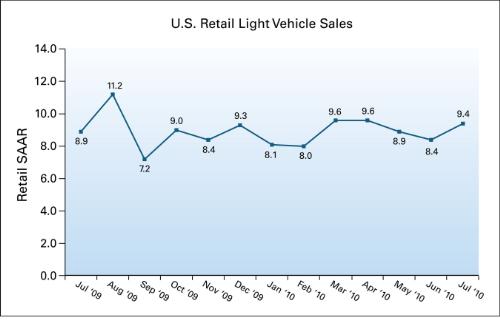 J.D. Power has good news and bad news for the auto industry. On the plus side, production is up dramatically from a year ago, and July sales will be significantly higher than those of June. On the down side, the company has scaled back its retail sales forecast for 2010, and a return to pre-recession levels isn't likely until 2012 at the earliest.

We'll start with the good news: thanks to a range of factors (notably customer incentives), July 2010 should see around 928,000 new vehicle sales on the retail side. That's about 25% higher than June's figure of 746,618, and -- even more impressive -- it tops the 878,918 vehicles sold in July 2009, when the federal government was running its popular Cash-for-Clunkers program.

Jeff Schuster, executive director of global forecasting for J.D. Power and Associates, has a few thoughts about the reasons for the jump in retail sales: "Even if the deals aren't as strong as they have been in the past, consumers may be grappling with the notion that these deals are as good as they're going to get. In addition, an increase in maturing leases and a less attractive used car market may be contributing to higher sales volumes."

Also good: vehicle production is up 72% over this time last year, and factories are now operating at about 65% of capacity -- a far cry from last year's 48%. Fleet sales are on the move, too, coming in about 4% over last year and on-track to break the 1,000,000 mark.

On the not-so-good side, however, J.D. Power revised its 2010 retail forecast downward by 100,000 units. The seasonally adjusted annualized rate for that segment now sits at 9.4 million, with total U.S. sales projected to ring in at 11.7 million units. While that's certainly better than 2009, it's a far cry from the average of 15 or 16 million units -- figures that Schuster suggests we won't see again for at least another two years.

Bottom line: it appears the U.S. may have emerged from the worst of the recession, but the auto industry will be feeling its effects for some time to come. We'll update these details once official July stats are announced in a couple of weeks.