Kia Schools Us in Smart Style with 2011 Optima Interior 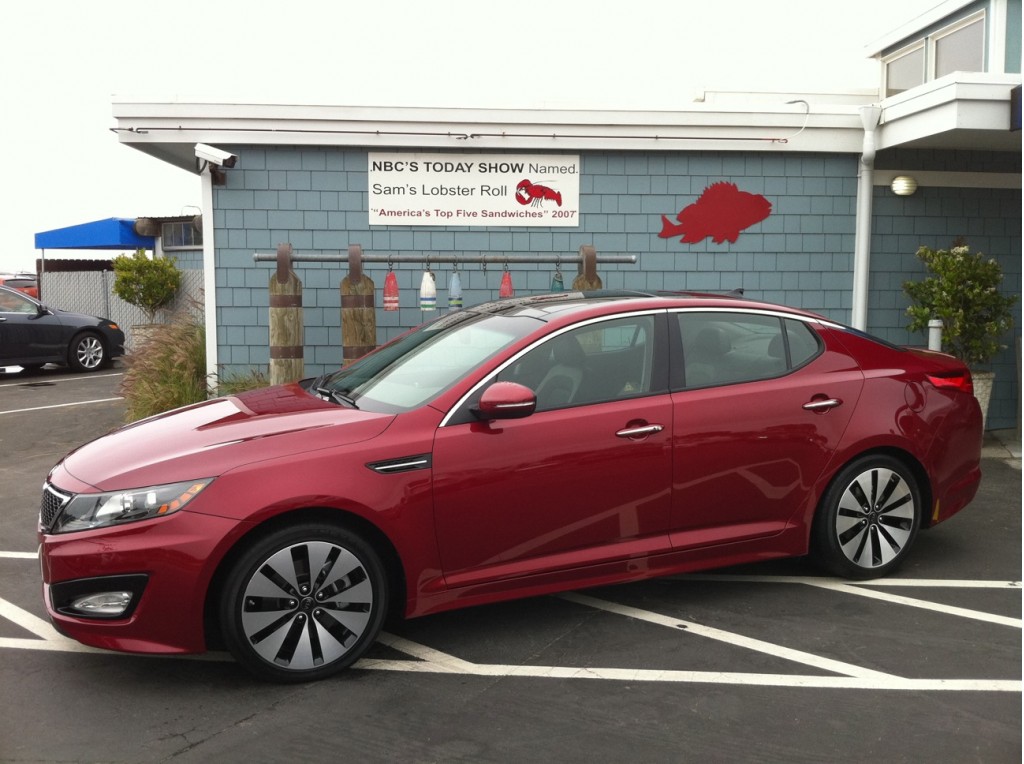 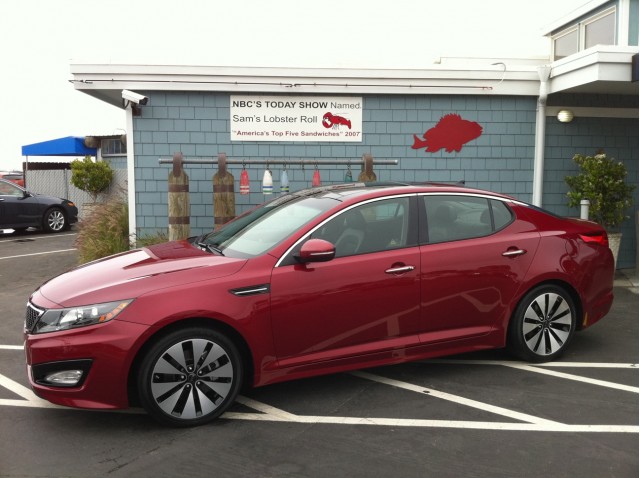 The 2011 Kia Optima doesn't arrive in showrooms until the fall, but earlier this year the South Korean automaker blitzed the 2010 New York auto show with its upcoming four-door with a showy worldwide reveal, a press release with some details on the car's powertrains and features, and best of all, a boozy after-hours party in a nifty Meatpacking District loft.

The only thing missing? A key to open the door and play around inside, to find out how much distance Kia's put between the Optima and another Korean sedan you might have seen here at TCC.

The Optima's cockpit is no longer a mystery. This week's press drives of the 2011 Kia Sportage included a special guest in the form of the Optima, parked outside of a lunch stop on the California coast--and with the doors unlocked, we took the chance to poke around the interior and to see how dramatically different it is from that of its company kin, the 2011 Hyundai Sonata. 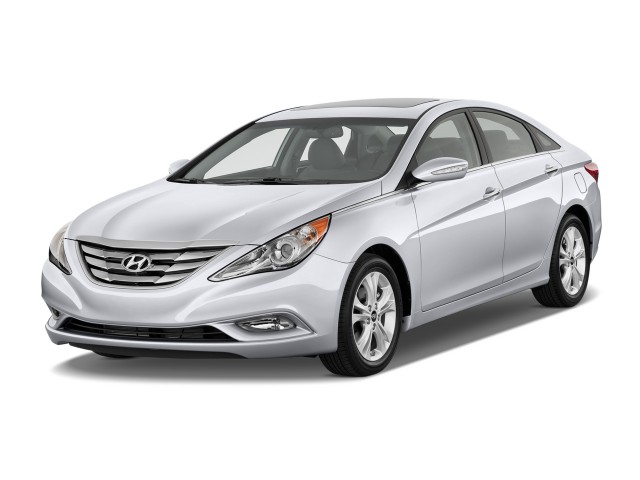 Call it badge engineering or a clever way to package and sell the same expensive pieces to different buyers, but the Optima and Sonata show how simple it can be to differentiate related cars from each other. In the bad old days of endless versions of various Mercurys and Oldsmobiles, you'd often see the same body on two, three, or even four vehicles sold by different brands, with only a nose and bumpers switched out to cater to dealers.

With the Optima, it's clear Kia and Hyundai have figured out how to keep the costs down while taking strikingly different paths in styling. You can see it here just on the sheetmetal alone: the Sonata's "fluidic sculpture" styling theme works a long, elegant roofline for a silhouette that's almost pure Lexus--if you agree with the valets at the San Francisco Intercontinental Hotel. The Optima's kicky rear quarters seem totally unique, by comparison, but the hard points underneath that define the passenger space are nearly the same. 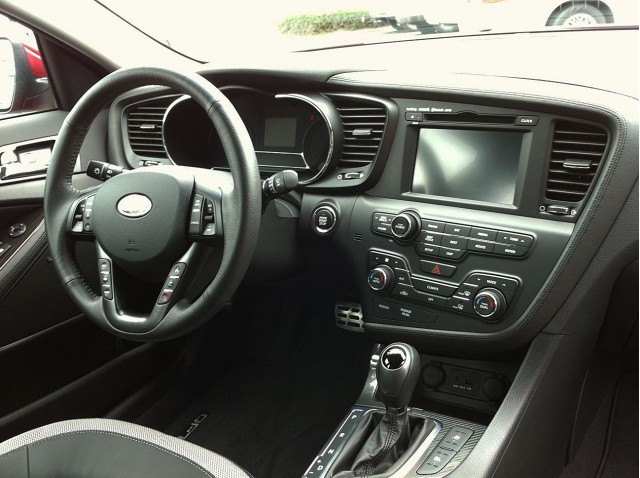 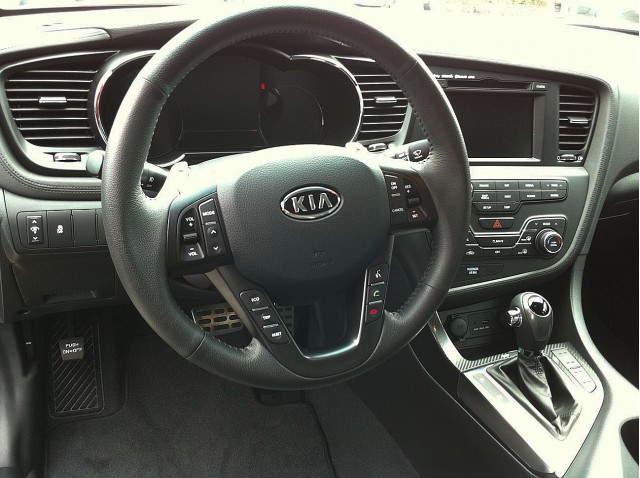 Inside, the Optima's just as distinct from the Sonata, and the production-ready interior is a lesson in how to put in personality without driving up development costs, which always get added on to the price you pay in the showrooms. You can see the Optima's "boomerang" that separates the driver's station from the front passenger zone--while on the Sonata below, the dash is more luxurious and open, and less overtly divided.

Where are the savings? Take a look at the location of the LCD touchscreen, the air vents, the shift lever and climate control, and the gauges. Nothing's really moved all that much; behind the Audi-like frame of the Optima's dash are the same inner workings as in the Sonata. Only here, they're capped with lines and forms that tell you how Kia wants you to perceive its brand: a little more engaging, a little more enthusiastic than the average Sonata buyer. 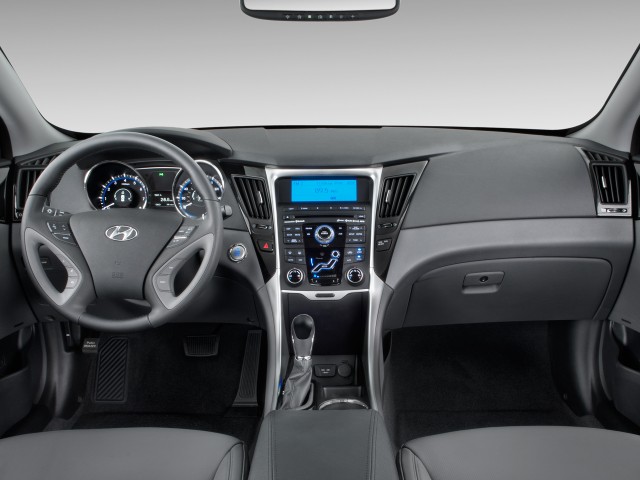 Other companies have mastered the same tricks. Volkswagen's one of the best at sharing big building blocks between all its brands, from VW and Audi and Seat and Skoda, to uber-luxury cars like Bugatti and Lamborghini. Ford's doing the same tricks with a range of cars like the Taurus and Lincoln MKS, the Fusion and MKZ, and the Flex and the MKT. GM's Buick Enclave and GMC Acadia couldn't seem more different--until you read the spec sheet.

Now Kia and Hyundai have picked up their game. And the game's just gotten a little tougher as a result.