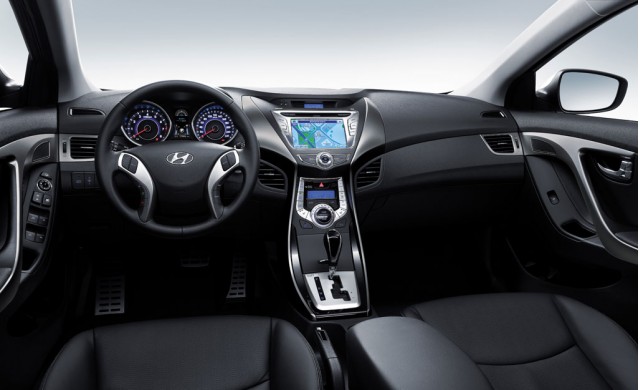 Hyundai is working on a brand new version of its Elantra sedan that’s due to go on sale later this year as a 2011 model, and we’ve already seen it on a number of occasionstesting in prototype form, although so far it’s always been heavily camouflaged. Now, we have our first clear look at the interior of the new Elantra, which has been revealed today by Hyundai (note that the images depict the South Korean spec model).

U.S. versions should be very similar and hopefully the big LCD screen and classy piano-black trim will also be available on local models. The new car should also get puddle lamps installed in the doors and there’s even the chance that heated leather seats may be an option.

Overall, there is a decisively more upmarket look and feel to the car, with plenty of influences from the interior of the 2011 Hyundai Sonata carrying over.

Not much else is known about the upcoming 2011 Hyundai Elantra, although it’s thought the car’s wheelbase will be slightly longer than the current model. Key details include a sloping, coupe-like profile, tapered back headlights and a square rump. Prototypes of the car have been spotted testing in both South Korea and the U.S., often alongside rival models like the Honda Civic and Kia Forte.

Power is expected to come from Hyundai’s latest 2.4-liter direct-injection four-cylinder engine matched to a six-speed automatic transmission. A smaller 1.6-liter unit may also be available.