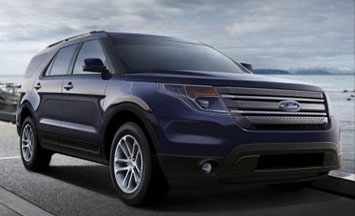 We've heard that Ford will be planning to install EcoBoost four- and six-cylinder engines in the upcoming 2011 Explorer SUV, and now we've got a few more details, especially as pertains to the the four-cylinder.

It will be a 2.0-liter turbocharged unit with direct injection, and Ford claims it will have fuel economy that is improved by 30 percent. Preliminary numbers provided by Ford indicate that the Explorer will achieve fuel-economy numbers of 19 mpg city and 26 mpg highway at a minimum.

If so, that's pretty good for a mid-size SUV. The EcoBoost engine gets a lot of credit, and the switch from body-on-frame construction to a unibody set-up will help, as well.

For the V-6, Ford is expecting 25 percent better fuel economy, which would translate into numbers of 17 mpg city and 25 mpg highway.

The Explorer will be officially unveiled on Monday.