Video: Kia Gets To The Soul Of Social 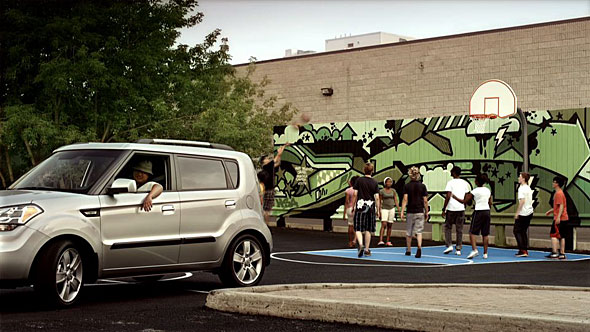 Screencap for Canadian ad for the Kia Soul

Screencap for Canadian ad for the Kia Soul

A few weeks ago, Kia resuscitated its popular "hamsters" campaign for the Kia Soul with a new commercial, new social media (including an alignment with "Petville"), and even a new clothing line. As with the ads from 2009, Kia's hamsters play the role of young, hip, hip hop-loving urbanites, cruising the streets in their Soul.

In Canada, however, a much different campaign for the Soul is being waged. Like their American counterparts, the "Drive Change" ads remain focused on urban environments, where the Soul is popular for its compact size, customizable features, and trendy exterior. But as we learn from Kia Canada's Facebook page, ad agency David & Goliath have dumped the cruising, head-bobbing hamsters in favor of something much more socially minded -- namely, social consciousness. Watch as three Kia Souls pull up to an unkempt parking lot and over the course of a day, transform it into a playground for kids at the Second Base Youth Shelter in Toronto:

Our take? It would've been very, very easy to push this clip into smarm territory -- territory that's been home to the Toyota Prius, for example -- but thankfully, David & Goliath kept its creative eye on the Soul's street cred. The agency managed to walk the fine line between volunteerism and Velveeta, giving us an ad that does the sort of thing that's usually limited to Honda commercials: it inspires, raises awareness, and encourages consideration, even without getting into the nitty-gritty of pricing and performance.

We like rodents just as much as the next guy, but if we had to choose, we'd choose the honesty and message of the "Drive Change" campaign over hamster swagger any day.