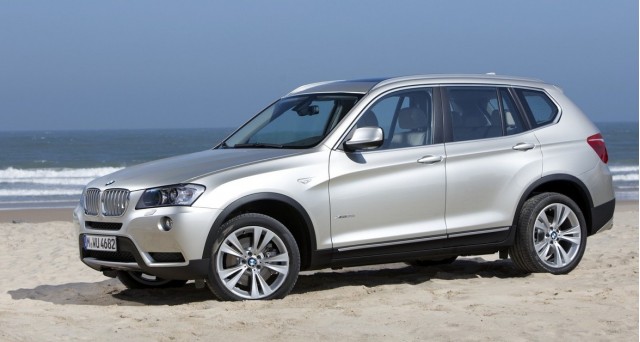 Cruise any upscale suburban shopping mall and you'll likely notice a lot of luxury crossover SUVs prowling the parking lot. The Lexus RX may be the undisputed sales king, but its spot isn't going unchallenged. The Acura MDX and updated Cadillac SRX are fighting to wrest the crown away, and now it's BMW's turn.

BMW's X3 is being updated for 2011, and it will receive many of the same upgrades that the 3-Series sedan--upon which the X3 is based--has already received. That means the xDrive35i will received a turbocharged 3.0-liter inline-six that makes 300 horsepower and 300 lb-ft of torque. BMW says that the xDrive35i will be able to reach 60 mph in 5.5 seconds from a standing stop.

Drivers who don't need or want such power can opt for the xDrive28i, which has a naturally-aspirated 3.0-liter inline-six that makes 240 horsepower and 230 lb-ft of torque.

The styling offers a new look to the front end, and the X3 grows some in size, gaining a half-inch in height, 3.36 inches in length, and 1.1 inches in width. Ground clearance increases by half an inch, and the 110.6-inch wheelbase is 0.6 inches longer.

Both engines will mate to an eight-speed automatic transmission, which will be used to boost both fuel economy and low-end torque.

The suspensions is updated, and optional electronic damping control will allow the suspension to be more responsive to changing road conditions. Models so equipped with give drivers the choice of Normal, Sport, and Sport Plus modes. Toggling between modes will change the X3's throttle response, power-steering assist, transmission shift points, antiskid system mode, and suspension firmness, if that's what the driver wants.

Also available on models with electronic damping control is a Performance Control feature, which will split torque 20/80 front and rear in order to maintain steady handling in curves. If necessary, the feature can apply the brake to the inside rear wheel and boost power to the outside rear wheel, to avoid having the X3 "plow" through corners.

The xDrive system sees little change. It will continue to deliver torque on a 40/80 front/rear split, and it will continue to be able to shift torque 100 percent to either the front or rear if the situation calls for it.