Who Needs EcoGuide When You've Got DriveGain On Your iPhone? 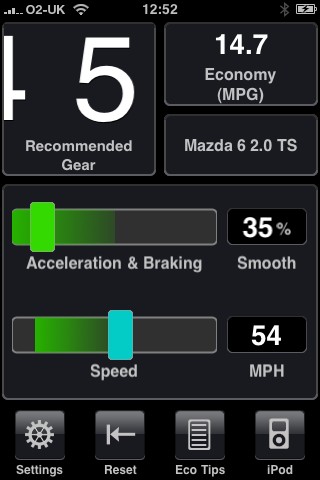 If you're serious about fuel efficiency, there are plenty of tools to help you wring more mileage out of the gas tank -- or the battery, if you swing that way. Some come standard, like the power display found on the Toyota Prius. Others are a little fancier, like the SmartGauge-EcoGuide combo on the 2010 Ford Fusion, which sprouts leaves and vines as your driving grows greener. Still others plug into your car's OBD connector to give readings on the go. Now there's a new kid on the diagnostic block, and you can download him from iTunes in about 60 seconds.

DriveGain is an app for the iPhone that uses the device's accelerometer and GPS capabilities to assess your driving prowess. The app also runs on the iPad (as an iPhone app) and on the iPod Touch (provided you can plug it into some kind of GPS system so the app can triangulate your location). It doesn't require any special adapters, but the manufacturer does suggest you have a cradle for your device so you can easily see it while driving. The iPad cradle? Not recommended.

DriveGain provides both visual and verbal assistance for drivers. The verbal lets you know when you're doing well (e.g. "Your cruising speed was good"), when you're not (e.g. "Try reducing your acceleration") and when you should be in top gear. You can flip between UK and US English voices, and presumably imagine Jeremy Clarkson sitting beside you in the turns -- again, if you swing that way.

DriveGain's visual tools are a bit more useful, offering plenty of graphics to indicate your current speed (and its effect on fuel usage), total cost of fuel used (based on up-to-date price averages), your CO2 output, recommended gear, and, of course, basic data like total distance traveled. Like some other apps, DriveGain also integrates iPod functionality, so you can enjoy your stash of tunes while hypermiling.

As good as all that sounds, there are a couple of caveats:

1. At the moment, DriveGain only works on cars with manual transmission. Support for automatic transmissions is "coming soon". Hybrids and EVs? We'll see.

2. It's not free. Heck, even former Symbian executives have to pay the bills, right? Still, at $6.99, it seems like a fairly good bargain, given the gas you could save. In fact, according to DriveGain's survey of "Eco Driving websites", the money you save on gas could pay for the app in as little as two weeks.

What's interesting about DriveGain is possibilities it opens up for driving applications. Sure, there are plenty of apps to help drivers keep track of fuel usage, but most are little more than digital versions of the dog-eared notebook you used to keep above the sun visor. DriveGain more fully exploits the built-in capabilities of Apple devices to create something that's appealing to enthusiasts and everyday motorists alike.

Furthermore, if DriveGain plays its cards right -- and given its founders' pedigrees, they have the connections to do so --  the company could forge some very interesting alliances with satnav makers down the line. The question is: will that mark a new dawn for standalone GPS makers like TomTom, or is it one more nail in their coffin, as mobile phones become catchall gizmos?

[TechCrunch and iTunes via Marty]