Toyota probably isn't the happiest place to work right now. Apart from the automaker's ongoing recall fiasco, Toyota took a nose dive in J.D. Power's recent Initial Quality survey (from 7th in 2009 to 21st in 2010), and at least one person at the UAW is trying to incite his followers to boycott the brand. But there is a bit of good news to report: the public doesn't hate Toyota nearly as much as they hate BP.

Greg Artzt is the CEO of General Sentiment, a company that measures the value of brands by monitoring online chatter on sites like Facebook, Twitter, Flickr, and YouTube. According to Artzt, "the firm's software analyzes some 30 million sources of content a day from news, social media, blogs and website. 'We use sentiment analysis to explore whether it's from a press release or just natural discussion.'" General Sentiment takes all that chatter, strips out the advertising and PR, and assigns each mention a score based on how positive the discussion is. So, if General Sentiment ranked mentions on a scale of one to ten, Joe Barton's apology would nail a 10 for BP (because it's so positive), while nearly everyone's reaction to Barton would clock in around 1.

For BP, the signs are terrible (though not nearly as terrible as the damage caused by the company's oil leak). As you can see from General Sentiment's one-sheet pasted below, the multinational giant has lost about $1 billion in brand value so far, and the loss rate seems to be accelerating. As the story drags on and disaster fatigue sets in -- and now that Tony Hayward has been dragged out of the media spotlight -- that rate will likely slow, but clearly, this is a major loss for BP, and it's not going to improve anytime soon. And we should note that this is just an evaluation of brand value: the dollar value of BP's real losses is far worse.

You might think that Toyota would find itself in a similar boat, but you'd be wrong -- partially. Yes, Toyota's lost a lot of luster over the past several months, but according to Artzt, the total reduction in Toyota's brand value is around $250 million, or about 25% of BP's loss.

Toyota's situation was likely helped by a number of things -- including the fact that Toyota's flaws weren't quite as graphic as BP's (floor mats don't pack the same punch as oil-soaked seagulls), and that at least one person hoping to capitalize on Toyota's missteps was outed as a fraud. Then too, automakers have passionate fans who stick by them, thick or thin. Oil companies? Not so much.

Of course, that's not much comfort to Toyota's shareholders, nor does it help the families affected by the automaker's faulty vehicles feel any sense of closure. But it does prove that mom was right about one thing: there's no point feeling sorry for yourself, because someone else always has it worse. 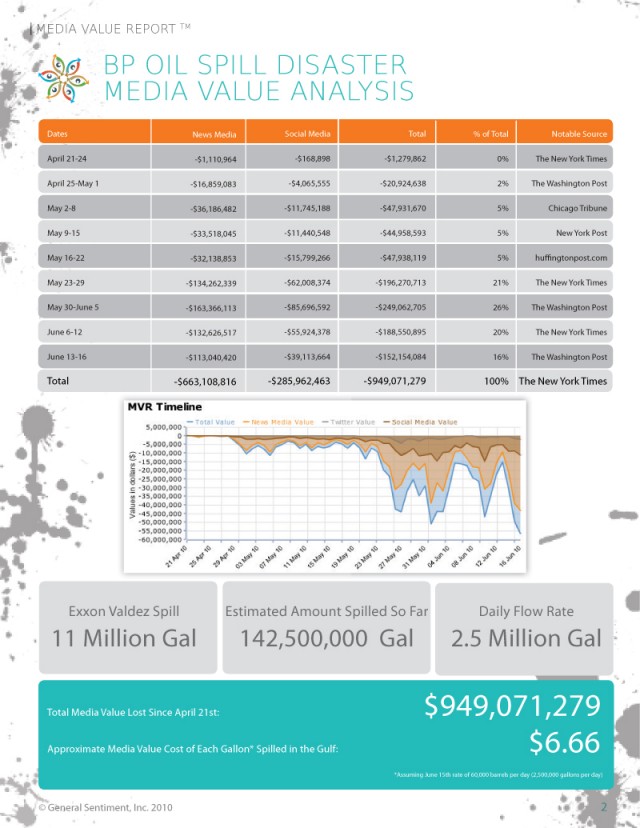