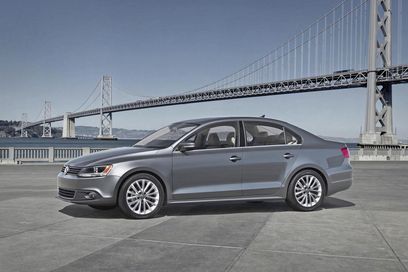 For those who have Teutonic tastes in family cars, Volkswagen has just unveiled its new 2011 Jetta.

We already previewed the new Jetta, but now the official numbers have been released. The new car grows 3.5 inches, to 182.7 inches in overall length. Taller passengers will appreciated the gain in size, as rear legroom is increased 2.6 inches to 38.1 inches. The increase in size is due to the fact that the Jetta moves off of the Golf platform and onto its own platform, which allowed engineers to start from scratch and focus solely on the Jetta.

In the U.S. and Canada, the Jetta will be offered with four engine choices: A 2.0-liter TDI diesel, a 2.0-liter four-cylinder gasoline engine, a 2.5-liter five-cylinder gasoline engine (R5 models), and a 2.0-liter four-cylinder TSI (turbocharged/supercharged combo) gasoline engine. Power numbers aren't yet available, except for Volkswagen's claim of 236 lb-ft of torque from the TDI, which will have common-rail fuel-injection. A manual transmission will be standard, and an automatic will be available. TDI and TSI models will be available with VW's 6-speed dual-clutch Direct-Shift Gearbox (DSG).

Trim levels are as follows: S, SE, SEL, TDI, and 2.0-liter GLI. We'd expect the SEL and TDI versions to be the most appealing to family buyers.

The interior is reworked, and one piece of news for families to note is that the rear seat will be a 40/60 split-folding unit.

The exterior makeover takes styling cues from the NCC Concept that VW showed in Detroit at the 2010 North American International Auto Show, with a few items taken from the company's CC "four-door coupe." The look still says Jetta, though.

Information on safety features is sparse, other than the news that the car will be available with up to six airbags when it goes on sale in October. Pricing will be aggressive, with a base around $16,000.