Barrett-Jackson Phones It In With A New Auction App 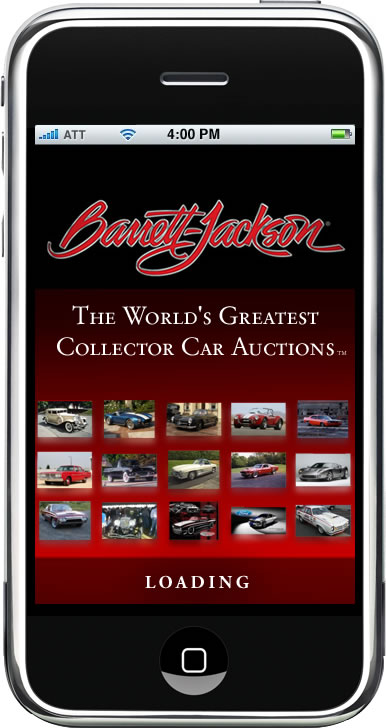 Given the popularity of eBay's auction app  (and the many spinoffs it has spawned), it was only a matter of time before car auction houses joined the fray. And now, one of the big daddies has stepped up to the plate: just in time for the Inaugural Barrett-Jackson Orange County Collector Car Auction (June 25 - 27), BJ has launched its very own app for the iPhone, iPad, and iPod Touch.

At first glance, the app seems to offer a lot of features. There are news updates, event listings, a handy map of the OC facility, and vehicle previews broken out by auction date. There's also section that allows visitors to purchase tickets, and for those who can't attend in person, there's a listing of auction broadcasts, which run on SPEED TV.

Of course, an auction app wouldn't be complete without some kind of alert system to let you know that your sweet honeypie of a ride is about to hit the block. This app allows users to move hot lots to a section called "My Garage", where you can opt to receive or skip updates on each vehicle.

Like many apps, Barrett-Jackson's also claims to offer social media integration, although there's no indication of how that actually works. There's an area for users to log in to Twitter and Facebook, where they're told that they can post updates to their accounts from within the app, but so far, we haven't figured out how to make that happen. Maybe it's not up and running just yet -- which is fine, we suppose, but we're of the opinion that if it ain't ready, don't launch it. Or better yet, include it in an update.

Despite that quibble, the app looks great, and apart from a slow load time the first time the app's cracked open, it seems pretty zippy. Now if we only had the dough to actually bid on that 1958 Nash Metropolitan, we'd be set.

SCOTTSDALE, Ariz. – May 26, 2010 - Just in time for its upcoming Inaugural event in Orange County, California, The Barrett-Jackson Auction Company has announced the release of a new, free app which brings the auction experience to the iPhone, iPad and iPod Touch. The app provides up-to-date information about Barrett-Jackson, photos and details about automobiles available at the events, notifications on a favorite vehicle, event location maps, event and SPEED TV schedules, ticket purchasing options, contact information and access to the Barrett-Jackson social media networks.

“With the popularity of the iPhone and iPad, developing an app was the next step in enriching the overall Barrett-Jackson experience,” said Craig Jackson, Chairman/CEO of Barrett-Jackson. “After the successful launch of the App for our recent Palm Beach Auction in April, we are excited to make it available for our Orange County event. Collectors and enthusiasts attending our upcoming show now have access to the most current news and information about Barrett-Jackson, their favorite automobiles and other event details right at their fingertips. This empowers them to ‘be in the know’ at all times.”

With its user-friendly interface, the new Barrett-Jackson app allows for quick access to personalized notifications and event news. The home screen contains the latest Barrett-Jackson Twitter updates and easy access to the website. The Car List feature allows you to browse autos available at the auction, smartly sorted by day. In conjunction with your Car List, the My Garage feature saves the Lot numbers you’ve chosen to “watch” by checking them off in your Car List. You can then be alerted when your selected Lot numbers are scheduled to go across the auction block.

The Next On Block feature provides a list of Lot numbers coming up on the auction block and is updated every 15 minutes so that you’re prepared to make your way to the bidder’s section. Included maps ensure that you’ll find your way in time. Additional links are available providing schedules, ticketing information, social networking and Barrett-Jackson contact information. To access the app from iTunes and for more information, visit: http://www.barrett-jackson.com/iPhone

“We initially tested our new app at the recent Palm Beach Barrett-Jackson event,” added Jackson. “The app performed flawlessly, which led to a tremendous response by those early adopters who appreciated the real-time information it provided. We’re ready for the general roll out now and look forward to harnessing this new innovation to continue growing the hobby.”

The Inaugural Barrett-Jackson Orange County Collector Car Auction will be held on June 25-27, 2010 at the OC Fair & Event Center in Costa Mesa, Calif. This will be the first Barrett-Jackson automotive lifestyle event in Southern California, which will include a road rally and cruise-in, as well as other activities being planned before the three day collector car auction begins. For more information about the action, please visit http://www.barrett-jackson.com/events/orangecounty/