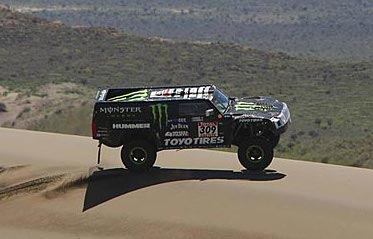 Anyone that's dreamed of owning an F-150 SVT Raptor or any other serious off-road truck has probably also dreamed about running in rallies like the Baja 1000 or the Dakar Rally. But as much fun as it is to run full-tilt across untamed terrain, it comes at a price. A price of about $570,000, according to Chile's archaeological sites council.

Chile's National Monuments Council has issued a report that the 2010 Dakar Rally caused over $566,000 (300 million Chilean pesos) in damage to the archaeological sites along the race route--and they're seeking to be compensated for the damage by the rally's co-host, Chile's National Sports Institute.

The NMC says the rally damaged 56 of the 111 heritage sites the route passed through, with 13 sites suffering "serious loss of archeological data," according to the report.

It's a sobering counterpoint to the excitement of the Dakar Rally. Environmental and potentially historical or cultural impact is something any off-road enthusiast should be cognizant of when choosing to drive their vehicle through the wilderness, lest the activity be deemed too damaging to be allowed to continue. And we certainly don't want to see that happen.