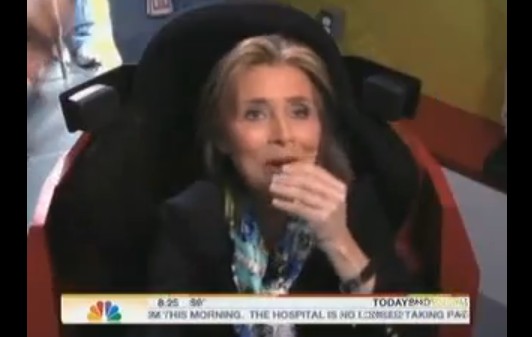 The cause of Vieira's profanity? A demonstration in the dangers of distracted driving. Last Friday was April 30 -- a day that Oprah Winfrey dubbed the "National No Phone Zone Day" in the hopes of raising awareness about the safety hazards posed by drivers who text behind the wheel. As part of the campaign, a driving simulator was brought to the Today show, and Vieira got a chance to take the virtual car out for a spin.

As you'll see in the video clip below, she'd just barely gotten up to speed when things began to go awry.

We admit, there's a lot of fine-tuning to be done in order to make the automobile a safe social space. There are some very promising leads on that front, but one that's definitely on the FAIL list is texting on a cell phone. Just do as our elected officials ought to do and keep it in your pants.