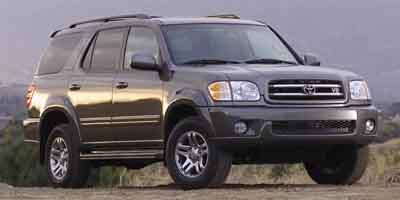 Toyota Motor Sales has announced a recall of about 50,000 Sequoia sport-utility vehicles from the 2003 model year for an issue with the electronic stability control system.

An issue with the control unit's program logic could cause the stability control to activate at low speed (about 9 mph, Toyota says) when not needed, after accelerating from a stop, resulting in acceleration that's slower than intended.

Only about 50,000 Sequoias from the early part of the 2003 model year are affected by the recall, and in fall 2003 Toyota had issued the first of several Technical Service Bulletins. Since then, the automaker says it has been responding to owners by replacing the skid control engine control unit (ECU) on a case-by-case basis.

Meanwhile, the National Highway Traffic Safety Administration (NHTSA) opened its own investigation on the Sequoia about 18 months ago, according to the New York Times, and the government agency has gathered 153 complaints regarding the issue.

"There have been no reported injuries or accidents as a result of this condition," Toyota says.

This is Toyota's second stability-control-related issue in the past month. Just a couple of weeks ago Consumer Reports noted an unexpected handling behavior in a test Lexus GX 460 that led Toyota to suspend the model's sales and then recall it for a stability control issue.

Electronic stability control (ESC, or VSC in Toyotas) is now widely offered and standard on most new cars and trucks, but in 2003 is was relatively uncommon. However several automakers, including Toyota moved to install the device through most of their sport-utility models well before required by the federal government. The measured phase-in by the federal government, requiring stability control on 100 percent of vehicles by 2012, requires all automakers to have the device on 75 percent of their 2010 models, 95 percent of 2011 models, and 100 percent of 2012 models.

ESC is especially useful in averting accidents, injuries, and deaths due to rollover in taller vehicles that could potentially be tripped by the combination of a loss in control plus a dropoff, a change in surface, or a barrier such as a curb.

For the most recent recall effort, beginning in late May Toyota will mail letters to all owners with 2003 Toyota Sequoia models affected by the issue. Or owners can call 800-331-4331.

The automaker says that if a customer has previously paid to have the ECU replaced, Toyota will consider reimbursement.