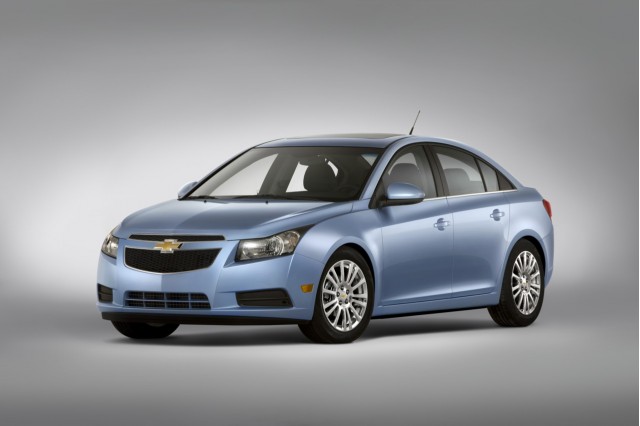 Small-car safety especially has come a long way. And while, by driving a smaller, lighter vehicle you'll still be at a disadvantage in certain situations, some of today's small cars with top marks—like the upcoming 2011 Chevrolet Cruze—can assure the security of a much larger vehicle.

As we outlined nearly a week ago, in a special Preview Drive of the 2011 Chevrolet Cruze, this new compact sedan has a number of safety segment firsts. Its ten airbags—including frontal, head-curtain, thorax side bags front and back, and knee bags—are the most in its segment, and the rear thorax and knee bags are standard-feature firsts for a value-priced compact car.

The new Cruze also has a collapsible pedal system to help reduce the risk of leg or ankle injuries—in a frontal crash, especially. Other noteworthy standard safety features include OnStar with Automatic Crash Response, which automatically notifies OnStar and first responders, including a 911 operator, depending on the chance of severe injury.

Although no U.S. crash tests have yet been conducted, General Motors is expecting top five-star and Good ratings in absolutely every category from the National Highway Traffic Safety Administration (NHTSA) and the Insurance Institute for Highway Safety (IIHS), respectively.

But so far, the Cruze has aced every other major crash-test program in the world.

The Cruze earned a score of 79 points out of 100 in the European New Car Assessment Program (EuroNCAP)—including an exemplary score of 96 percent in adult occupant protection that makes it one of the safest passenger cars, beating all tested premium-brand vehicles and a runner-up for the best test results this year.

In those European tests, the Cruze earned the maximum points allowed for both frontal offset and side-impact crash protection and was the first passenger car to get a perfect score among those tests since the ratings were established in 1997.

The Cruze has also achieved top marks in the KNCAP (Korea), C-NCAP (China), and ANCAP (Australia).

These market-specific models of the Cruze vary slightly, but not significantly, in structure, according to GM safety engineer Ken Bonello, and the Cruze is essentially a global compact car. And according to Bonello, the Cruze was able to ace these slightly different tests through extensive computer modeling from the start, attention to multiple load paths, and the use of more crash sensors than required.

We're eagerly awaiting both a first drive of the 2011 Chevy Cruze in final production form, as well as confirmation of this model's crash-test excellence for the U.S. In the meantime, be amazed by these EuroNCAP highlights.