Video: Would A $40,000 Bar Tab Make You Reconsider Drinking And Driving? 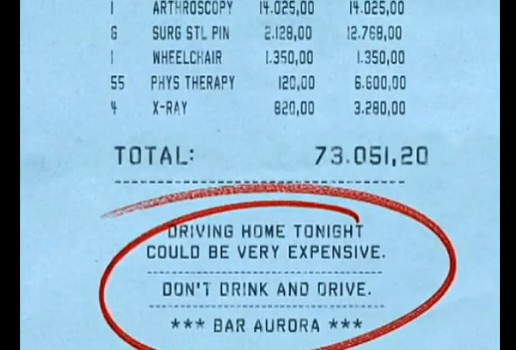 Screencap from anti-drunk-driving campaign in Brazil

Screencap from anti-drunk-driving campaign in Brazil

If you're a parent, teacher, or wedding planner, you already know that people often refuse to listen to common sense. Sure, you can tell folks that smoking is bad or bungee jumping is dangerous, but until those things have an effect on their own lives, your kids, students, and nutso clientele will probably just ignore you. And so, two bars in Brazil began to wonder, "How can we make our patrons understand the real cost of drinking and driving? How can we do that without preaching, but by making the problem personal?"

Over the course of an evening, bartenders gave out tabs that included not only a tally of beverages, but also ambulance fees, physical therapy, and other expenses that might be incurred after an auto accident. The partiers were expecting to fork over a handful of reals for a couple of caipirinhas, but instead, they got bills totaling upwards of R$73,000 (just over $40,000 U.S.). As you can see from the clip, that made patrons even queasier than the cheap cachaça they'd been swilling:

The genius of this campaign is three-fold. First, it's effective with viewers. True, it doesn't have the emotional impact we've come to expect from many drinking-and-driving ads in the U.S., but there's something to be said for putting a dollar value on bad behavior.

Second, it seems to have been effective with patrons. The drinkers -- the very people who need to hear this campaigns message -- appear to get it. Yes, they all giggle with relief when everything is explained, but as the video shows, the stunt made quite an impression.

And third, it was inexpensive to create. Compared to the Avalon campaign we saw earlier today, this seems more resonant -- and it was done at a fraction of the cost. The bars and/or Ogilvy seem a tad self-congratulatory at the end ("For an action that cost us nothing, we were able to make people think"), and we can't guarantee that every tippler made it into a cab that night, but it's still a great example of how far a little creativity can go.